Book Review for Every Summer After by Carley Fortune

Every Summer After by Carley Fortune 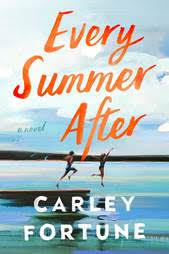 Taken from Goodreads:  Six summers to fall in love. One moment to fall apart. A weekend to get it right.

They say you can never go home again, and for Persephone Fraser, ever since she made the biggest mistake of her life a decade ago, that has felt too true. Instead of glittering summers on the lakeshore of her childhood, she spends them in a stylish apartment in the city, going out with friends, and keeping everyone a safe distance from her heart.

Until she receives the call that sends her racing back to Barry’s Bay and into the orbit of Sam Florek—the man she never thought she’d have to live without.

For six summers, through hazy afternoons on the water and warm summer nights working in his family’s restaurant and curling up together with books—medical textbooks for him and work-in-progress horror short stories for her—Percy and Sam had been inseparable. Eventually that friendship turned into something breathtakingly more, before it fell spectacularly apart.

When Percy returns to the lake for Sam’s mother’s funeral, their connection is as undeniable as it had always been. But until Percy can confront the decisions she made and the years she’s spent punishing herself for them, they’ll never know whether their love might be bigger than the biggest mistakes of their past.

Told over the course of six years and one weekend, Every Summer After is a big, sweeping nostalgic look at love and the people and choices that mark us forever.

My Thoughts:  Every Summer After is a sweet book.   A teenager goes away for the summer to their family cottage, meets the boys who live next door, and they are best friends.  I love how Sam and Percy are.  As best friends they are perfect.  The attraction between them starts so innocently, both of them shy and unsure how to act.  As they grow up, summer after summer, the attraction grows, their feelings become more adult like.   I felt like Carley Fortune, author, did an amazing job in keeping the character true to their ages.   They acted as teenagers and reacted as teenagers.

This story was unique in that it was told in dual timelines and neither timeline gave away the reason that Sam and Percy had not seen each other in 12 years.  I had guesses, I wondered, but I did not quite have it figured out until it was revealed.  The choices that both of them made had huge impacts on both of their futures and I was hopefully that they could work through whatever had pulled them apart and find a future together.

Every Summer After is a book of family, friends, teenage love, and second chances.  I suggest this as a summer read.

**Thank you Chelsea Pascoe at Berkley for a copy of the book in exchange for my honest review. 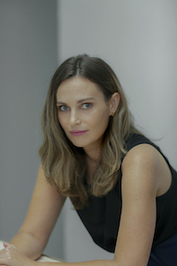 Meet Carley Fortune (taken from her website):  Carley Fortune is an author and award-winning journalist, who has served as an editor at some of Canada’s top publications. Her first novel, Every Summer After, is your next beach read. The book is a nostalgic story of childhood crushes, first loves, and the people and choices that mark us forever. It will be released on May 10, 2022.

Carley was most recently the Executive Editor of Refinery29 Canada, a job that gave her a lot of pride, joy, and a few migraines. Previously, she was the deputy editor of Chatelaine magazine, where she oversaw the brand’s digital transformation. After being promoted to Editor in Chief, she produced one whole issue, then left to launch Refinery29 Canada, making her the shortest-serving EIC in Chatelaine’s 90+ year history, a fact you will not find on its Wikipedia page.

Carley’s sixteen-year tour around the Canadian media industry has included editorial positions at The Globe and Mail, Toronto Life magazine, and the much-beloved, now-defunct weekly paper, The Grid. Not surprisingly, she likes coming up with new ideas and prefers the beginning of things. Carley was born in Toronto, and spent her young life in the suburbs of Sydney, Australia, and in Barry’s Bay, a tiny lakeside town in rural Ontario.

Carley holds a Bachelor of Journalism from Ryerson University. She lives in Toronto with her husband, whom she met in a magazine features writing class at j-skool and pursued doggedly after hearing about his nonna’s homemade lasagna. They have two sons. Carley is currently writing her second novel.