Book Review for Dead Against Her by Melinda Leigh

Dead Against Her by Melinda Leigh

Expected publication: May 17th 2022 by Montlake

Called to an isolated farm to check on an elderly widow, Sheriff Bree Taggert finds a brutal double homicide. One of the victims is Eugene Oscar, the bitter and corrupt former deputy she recently fired.

Working with criminal investigator Matt Flynn, Bree discovers that she isn’t the only one who had a troubling history with Eugene. But someone doesn’t want Bree digging up the past. She becomes the target of a stranger’s sick and devious campaign calculated to destroy her reputation, career, family, and new relationship with Matt. To make matters worse, she’s the prime suspect in Eugene’s murder.

When her chief deputy goes missing while investigating the case, Bree refuses to back down. She won’t let him become the next victim. His life and her future depend on finding a killer nursing a vengeful rage.

My Thoughts:  Bree Taggert is an amazing character.   I love trying to figure out how her brain is working while she tries to solve the crime.  There are times I can see where she is heading and other times I have no idea what would happen next.   The book is written to keep the reader on their toes, keep them guessing at what would happen next, and turning page after page unable to stop.

The mystery, the crime was the main part of the story but I also love the romance.  Matt and Bree have kept their relationship quiet.  I enjoyed that they stepped out in the public some and that they were not shy about telling each other their feelings.  I like how Matt does not overstep while working with Bree, he supports in her in job, works side by side with her, and lets her do her dangerous job.   Bree is perfect for Matt and Matt is perfect for Bree.

Melinda Leigh is a must-read author for me.  I love this series and am always excited when I know a new book is coming out.  I recommend reading any of the books in this series but they can be read as a standalone.

**Thank you NetGalley for a copy of the book in exchange for my honest review. 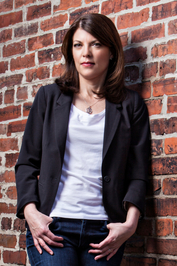 Meet Melinda Leigh (Taken from her website):  #1 Wall Street Journal and #1 Amazon Charts bestselling author Melinda Leigh is a fully recovered banker. A life-long lover of books, she started writing as a way to preserve her sanity while raising her kids. Over the next few years, she learned a few things about writing a book. The process was much more fun than analyzing financial statements, and she decided to turn her hobby into a career.

Her debut novel, SHE CAN RUN, was nominated for Best First Novel by the International Thriller Writers. Since then, she has garnered numerous publisher awards, including two Silver Falchions and three Golden Leaf Awards. She is a two-time RITA® Award Finalist and has earned three Daphne du Maurier Award nominations. Melinda’s books have sold over 11 million copies.

Melinda holds a 2nd degree belt in Kenpo Karate. She’s dabbled in Arnis stick fighting, studied Brazilian Jiu-Jitsu, and taught women’s self-defense. She lives in a messy house with her family and a small herd of rescue pets, who clearly run the show. With such a pleasant life, she has no explanation for the sometimes dark and disturbing nature of her imagination. Find out more about Melinda by visiting melindaleigh.com.