Book Review for The Paris Showroom by Juliet Blackwell

The Paris Showroom by Juliet Blackwell 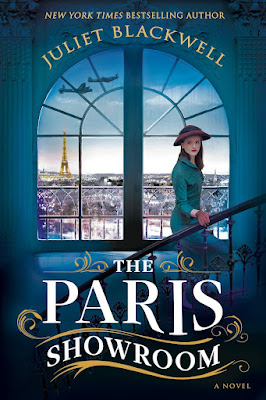 The Story: Capucine Benoit works alongside her bohemian father to create luxury fans and design for the haute couture fashion houses of Paris. In the midst of her free-spirited lifestyle, modeling for famed artists and dancing the night away at Jazz clubs, life as she knows it comes to a startling halt when the Germans invade Paris in June of 1940. Soon after, Capucine and her father are betrayed to the secret police and arrested for his political beliefs. After their capture, Capucine quickly spots an opportunity for her and her father to stay in France, when she overhears an officer searching for artisans to assign local work.

Capucine’s clever thinking sends her to a work camp located in the heart of Paris, within the Lévitan department store, instead of a concentration or death camp. There, hundreds of prisoners work to sort through, repair, and put on display the massive quantities of art, furniture, and household goods that have been stolen from Jewish homes and businesses.

Capucine’s estranged daughter, Mathilde, remains in the care of her conservative paternal grandparents, who are prospering under the Nazi occupation. Naive and sheltered, Mathilde begins to wake up to the horrors of the war when her mother and grandfather are arrested and a childhood friend goes missing. She now begins to question everything and finds herself drawn into the shadowy world of Paris’s Résistance fighters. As Mathilde considers a new perspective and works to track down her mother and grandfather, she starts to understand her unconventional mother and the choices she made.

My Thoughts:  Anyone who has read my reviews knows that I love WWII books.   Juliet Blackwell wrote a story that intrigued me.  I was entirely enthralled by this unique look at Paris during WWII.   There is so much to learn from a historical fiction book, in this book I learned so much about what had been happening to those detained by the Germans.  I learned that those detained were not all sent to camps, in this book they were sent to a department store.  Not all the guards were horrible people, and some did what they could to help the prisoners.

Capucine Benoit had an interesting life before the war.   She was a fan maker, she lost her husband, had a daughter, had in-laws that did not appreciate the life she was living, and had a boyfriend that was from the US.  I enjoyed seeing how all the before war life choices would play into her war life choices.  Capucine’s strength was immense as she was held prisoner.  She was a leader within her pod of inmates, she was willing to make choices that pushed her into dangerous territory but never beyond what she could handle, she stayed true to her friends both inmates and non-inmates, and her family was the most important to her.   I love Capucine.  She was a soft spoken, behind the scenes hero of WWII Paris.

The Paris Showroom gave me a unique look at WWII as told by Capucine and her daughter, Mathilde.  I was entirely absorbed into the store and excited to continue reading their story. Capucine is a hero prisoner.   She was a leader within her pod of inmates, she was willing to make choices that pushed her into dangerous territory but never beyond what she could handle, she stayed true to her friends both inmates and non-inmates, and her family was the most important to her.   Mathilde is someone who grew up with a privileged life with her strong opinionated grandparents.  As she goes out in the world and sees what is happening, she realizes that her grandparents opinions are not always the same as hers.

There is so much to learn in The Paris Showroom.  Your heart will break at the horrors of WWII but it will soar at the strength of the characters.

Thank you Chelsea Pascoe from Berkley for a copy of the book via NetGalley in exchange for my honest review. 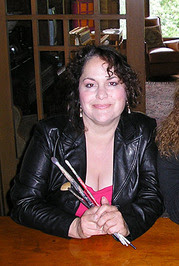 Meet Julia Blackwell (Taken from her website): Juliet Blackwell was born and raised in the San Francisco Bay Area, the youngest child of a jet pilot from New York and an editor from Texas. She graduated with a degree in Latin American Studies from University of California, Santa Cruz, and went on to earn Masters degrees in Anthropology and Social Work from the State University of New York, Albany.

While in graduate school she published several articles based on her research with immigrant families from Mexico and Viet Nam, as well as one full-length translation: Miguel León-Portilla’s seminal work, Endangered Cultures. Juliet taught Medical Anthropology at SUNY-Albany, was producer for a BBC documentary about Vietnamese children left behind by US soldiers, and worked as an elementary school social worker in rural New York. Upon her return to California she became a professional artist and ran her own decorative painting, historical renovation, and domestic design studio for more than a decade.

In addition to mainstream novels, Juliet pens the New York Times Bestselling Witchcraft Mysteries and the Haunted Home Renovation series. As Hailey Lind she wrote the Agatha Award-nominated Art Lover’s Mystery series. She is past president of Northern California Sisters in Crime and former board member of Mystery Writers of America.