Book Review for And So We Dream by Linda Mahkovec

And So We Dream by Linda Mahkovec 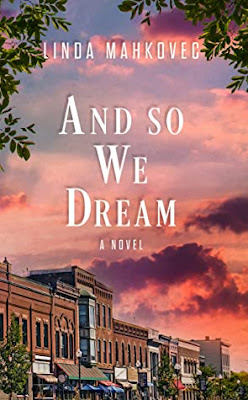 Taken from Goodreads:  In this coming-of-age story set against the backdrop of the Vietnam War, a lonely boy finds acceptance when he spends the summer in a loving family with three beautiful daughters.

Twelve-year-old Joey Roland is sent away to family friends while his parents try to work things out. He’s eager to leave sadness and secrets behind in Chicago and head downstate to the small town of Greenberry, where the Vitale family awaits him. He thinks of their town as boyland—a world of bike riding, fishing, and going barefoot. Though initially shy of the teenaged daughters—Anne, Vita, and Beth—they welcome him into their lives of adventure, beauty, and dreams.

Joey especially bonds with the middle sister, Vita, and her all-or-nothing pursuit of an acting career. Joey’s “there must be more” merges with Vita’s “I must make it happen” resulting in a magical summer where the town of Greenberry becomes the crucible for two desperate dreamers

My Thoughts:  I thought I was getting a book more about the Vietnam War.   What I read was a book about a young boy who went to stay with family friends for a summer.   In that summer he learned what he wanted to do with his life.   He also became part of a family that supported his dreams and accepted him without any judgements.   I really enjoyed the story.  I loved how the main characters in the story were all kids.   They played outside, they had summer jobs, they had dreams, but most of all they had each other.

There were times that I felt the story was repetitive.  The conversations that the characters had seemed similar from chapter to chapter, but they were conversations that children of that age would have and would probably have multiple times.  Linda Mahkovec did a perfect job of keeping the children true to their ages.   The parents were very laid back but they cared and openly loved all the children.

And So We Dream is a story of family, friendships, and following your dreams.

**Thank you Melissa Amster at Author Marketing Experts from a copy of the book in exchange for my honest review.

Meet Linda Mahkovec (taken from Goodreads):  Linda Mahkovec is the author of The Christmastime Series, love stories set predominantly in New York City during the World War II years. She also has two collections of short stories, The Dreams of Youth and Seven Tales of Love, and a contemporary novel set in Seattle, The Garden House.

Used to write as Agnes Irene

Themes of love, family, home, and making the most out of life dominate her stories, and though they may be set against the backdrop of war, or deal with the disappointments in life, the overarching feel is uplifting and hopeful.

One thread that runs through much of her work is that of the female character with an artist sensibility –whether she is a painter, a gardener, or simply someone who lives creatively and seeks out a life of beauty and meaning.

Another thread in Mahkovec’s work is the celebration of the seasons: the thrill of the first flowers of spring, barefoot summer nights, the nostalgic beauty of fall, and delight in the first snowfall.

Mahkovec was born and raised in a small town in Illinois. She then spent several years in the San Francisco Bay area and Seattle, and for the past thirty years has lived in New York City. She has a PhD in English, specializing in Victorian literature.

To find out more, please visit her at lindamahkovec.com.