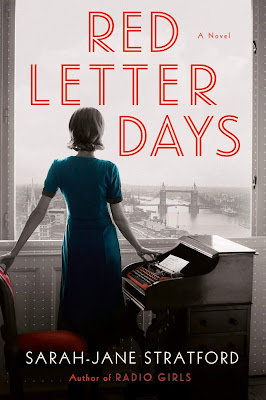 A striking novel from the acclaimed author of Radio Girls about two daring women who escape McCarthy-era Hollywood for London, where they find creative freedom and fight the injustices of the Red Scare.

Nineteen-fifties America is bright and full of promise, and Phoebe Adler, a New Yorker brimming with talent and ambition, is forging her way as the rarest of things: a female television writer in Hollywood. But fears of a growing Red Menace cloud the optimism, egged on by the hate-mongering of Senator McCarthy. A blacklist is created to cast out communist sympathizers, smashing careers and ruining lives. When Phoebe finds herself caught in the hysteria’s web, she flees to London.

Together Phoebe and Hannah successfully fight unfair bias and sexism, but danger still looms in this supposed sanctuary. And when their families and friends—their very lives—are threatened, they will have to make impossible choices.

Hollywood during the 1950s was a dangerous place to be.    Writers, directors, and actors were all being watched.   There were accusations of communism being written into productions to corrupt America.    Some of those blacklisted fled to other countries hoping to be able to continue working.    This is the story of Phoebe Adler who was blacklisted, subpoenaed and fled to London hoping to find a way to make a living.

I was not very familiar with this era in Hollywood but was intrigued at how quickly people pointed fingers just to save themselves and how quickly the American Government accepted those names without real proof and let others off the hook.  I was ashamed at how many Americans’ accepted this for the truth not bothering to find out what the whole story was.    I guess a time shortly after a war can change your outlook on life and your neighbors.

Phoebe was brave to step out on her own, in a different world than she was used to, and without any support from her friends.   I love how she took chances, weighed her options, and managed to still be okay.   This was not the life she wanted, and she knew she had to be cautious but she still lived, loved, and made something of herself.     The people she met in London were willing to help her, protect her, and guide her on ways to keep herself safe and I love that she was accepted into their family of blacklisters.