Review for All Geek to Me by Allie York

ALL GEEK TO ME
Allie York

Welcome to Words for Nerds, the best comic book shop in the south, and the next series from Allie York! Noralee was the ultimate nerd, she owned a comic book shop to prove it and Wyatt’s life couldn’t be more hectic with being a cop and father. Does Wyatt have what it takes to be Noralee’s real-life superhero? Fans of Teagan Hunter's Texting series will nerd out for this single dad, hot and fun romantic comedy. 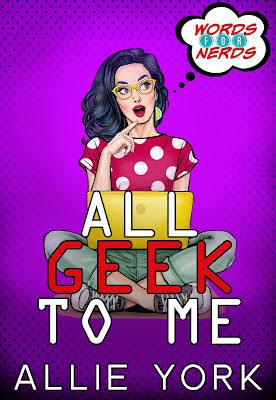 I, Noralee Reynolds, lead the ultimate nerd life. I own a comic shop, have a great group of geeky friends to work with and wear a different cosplay every day. Since inheriting the family business I’ve had no time for a personal life of my own. Even if hosting a speed dating event makes me wish otherwise.

I, Wyatt Collins, lead a hectic life. As a single dad, I've only got time for two things - raising my son and being a cop. I wasn't looking to cuff myself to anyone. Then I crossed paths with a nerdy comic shop owner who made me think twice.

Things are great until a little self-doubt has Noralee wanting to run away.

Can Wyatt convince her that he can be her real-life superhero?

I am so far away from being a nerd like Noralee that when I read what this book was about I wasn’t really sure it was the book for me but because I have read Allie York in the past and loved her books I decided I should give it a try.   I am so glad that I did.   While Noralee speaks comic books and geek, it was geek that I was familiar with.   The references made in the book were characters and movies I was familiar with so I understood her references.  It was fun to let the geek side I didn’t know I had come out and enjoyed this book.

Wyatt, the hot cop, was a fun character.   He was not a geek and did not speak geek.  Yet, he didn’t let this stop him from getting to know Noralee.    I love how he planned their date to include special places and things that would interest Noralee.   He kept her safe from herself, laughed when things didn’t go quite as planned, and accepted her exactly as she is.    The fact that he was a father was never far from my mind, although I am curious at the rest of his story.   There were hints  (like how long ago it was since he had sex and the age of his little boy that were never finished)  there was more to his story and I’d love to know it.

All Geek to Me is a fun book, a quick read.

Thank you to Forever Write PR for a copy of All Geek to Me in exchange for an honest review.

Buy Now or Read for FREE with Kindle Unlimited! 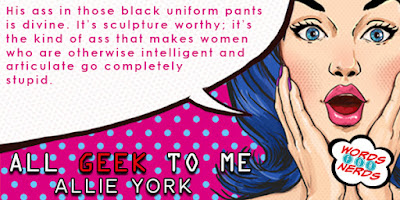 “I’ll speed date if you need me, but I’d rather not. You three are the ones who need to find men. Aren’t you lonely?” Greer hasn’t heard from Neal in four days and we all know it, but none of us have the heart to be mean to her about it. It’s not worth her heartbreak.

“Me? Lonely?” I look at all three of them. “I can’t get rid of any of you long enough to be lonely.”

“Oh whatever. I saw you fall all over that cop. Literally.” Tuesday tosses her hair over her shoulder.

“She isn’t wrong.” Greer gives me a look that says she’s on to me.

“No lies detected.” Rae pushes her glasses up on her nose with her forearm so her fingers can be used for whatever she’s playing on her phone.

“Oh! What if he comes to speed dating?” Tuesday straightens and grins like the Cheshire Cat.

“I can guarantee that he isn’t coming to speed dating at a comic shop.” I roll my eyes and lean to shut off the computer for the night. It’s almost closing time and everyone has cleared out except for a few lingering kids in the comic club. “There is no way he’s single,” I add stupidly. I should have just denied the fact that I think he is the hottest man I’ve seen outside a Marvel movie… or Aquaman.

“So, you admit that you want to check out what’s under that uniform?” Rae stops looking at her phone and blows another bubble.

“He’s been here three times now. What if he did come? Would you do it?” Greer crosses her arms over her chest and stares me down.

I am so sure of myself that I hold up my Mocking Jay salute. “If Officer Collins shows up, I’ll not only participate, but I’ll also buy you all drinks when we go out Saturday night.” There is no way in hell that man would ever show up for speed dating, much less at Words for Nerds.

About the author
Allie is a mom, wife, and dog groomer by day. At night she is posted at her laptop writing or reading in a cozy corner. She has a soft spot for gooey romance,  coffee, and anything cute and furry