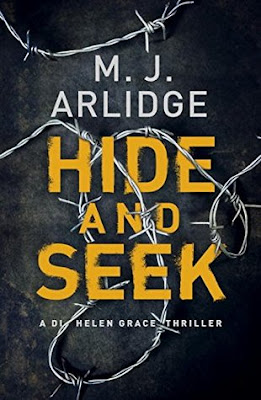 Prison is no place for a detective
Helen Grace was one of the country's best police investigators.
Now she's behind bars with the killers she caught.

Framed for murder
She knows there is only way out:
stay alive until her trial and somehow prove her innocence.

Locked up with a killer
But when a mutilated body is found in the cell next door,
Helen fears her days are numbered.

A murderer is on the loose.
And she must find them.
Before she's next . . .

I am hooked.  100% hooked on the Helen Grace series by MJ Arlidge.    Arlidge has a talent to pull the reader in, lead the down a path, and then swiftly change paths taking the reader a different way.    I love every word, chapter, and page that she writes.  Hide and Seek is my new favorite from her.

The characters are familiar from other books in this series and the storyline continues.    With Hide and Seek you really need to read Little Boy Blue first as this is the sequel.  The story picks up right where Little Boy Blue ends.   DI Helen Grace is in prison being charged with murder.   Of course it isn’t that cut and dry.    There is a murderer, an active murderer in the prison and is killing the other inmates.    Helen, being a police officer, just cannot help herself and goes about working the crimes to find out who is killing inside the prison walls.

MJ Arlidge did a great job of writing the story without having the usual banter and togetherness of the core characters.    DI Helen Grace was removed from the police office world and left on her own in a world where everyone hates the cops.

I recommend Hide and Seek along with the rest of this series.   Again, Hide and Seek should be read after Little Boy Blue since the storyline continues but if you are okay with having to catch up a little it can be read alone.

Thank you Loren Jaggers at Berkley Publishing for a copy of the book in exchange for an honest review.

Praise for LITTLE BOY BLUE
“The writing is so well done and so vibrant and realistic that it feels like we’re always standing over Detective Helen Grace’s shoulder while she takes on these horrendous crimes. A definite A+ has to be given for one of the best, if not the best series detective in suspense fiction.”—Suspense Magazine

Praise for LIAR LIAR
“British author Arlidge’s fourth novel featuring Southampton Det. Insp. Helen Grace (after The Doll’s House) is so good that it will send new readers scrambling to catch up with the
earlier books in the series.”—Publishers Weekly, starred review

“This is an addictive installment in a reliably strong series — think James Patterson or Patricia Cornwell, with a (not-so-posh) British accent.”—USA Today, 3 stars (out of 4)

Praise for EENY MEENY
“Boy, do the pages fly by…It's almost always cause for skepticism when a book's jacket copy promises an ingenious new variety of serial killer, but amazingly enough it's true of M.J. Arlidge's gripping debut.”—USA Today, 3 ½ stars (of 4)

“A brilliant read that is impossible to let go of until the final page.”—Crimespree Magazine

Praise for POP GOES THE WEASEL
“Arlidge delivers on the promise of the first Helen Grace thriller with another gripping and action-packed read topped by a final twist.”—Library Journal

“Readers will root for this admirable if flawed heroine every step of the way.”—Publishers Weekly

Praise for THE DOLL’S HOUSE
“Arlidge has created a memorable heroine in Helen Grace, who combines insight, grit, and an appealing personal vulnerability…”—Alfred Hitchcock Mystery Magazine