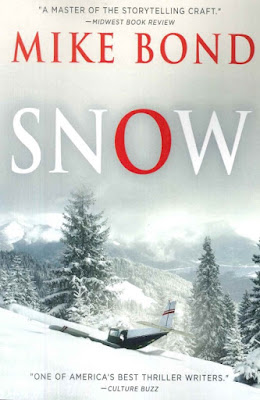 Deep in the Montana wilderness, three hunters find a crashed plane filled with cocaine. Each has  a reason to claim it for himself. They soon learn that there’s no such thing as easy money when they find themselves hunted by a Mexican cocaine cartel, the DEA, Las Vegas killers, their guide, and the police of several states. The thieves flee from coast to coast with their adversaries in stubborn pursuit as Mike Bond delivers another knock-out, multi-layered adventure in SNOW (Mandevilla Press; September 2017).

When they found the plane, they thought their problems were over. Zack, former NFL star now a TV sports icon, owes $2 million to some nasty people in Vegas.  Steve, a Wall Street broker, may have lost all of his and Zack’s investments. Curt, their guide, a half-Cheyenne mountain man, is trying to save his ranch from an energy company takeover.

The truth is that their find put trouble in hot pursuit. Diego is an executioner for the cocaine cartel. Maria Christina, a Harvard grad and Yale MBA, runs the cartel. Whitney Castro grew up in the Denver slums and is now a brilliant and dedicated DEA agent. Kenny Stauffenberg is an easy-going Montana sheriff who never gives up a hunt.

From the frozen peaks of Montana to the towers of Wall Street, the slums of Denver and the million-dollar tables at Vegas, SNOW is an electric portrait of today’s American culture, the invisible line between good and evil, and what people will do in their frantic search for love and freedom.

I was not sure what to think about Snow by Mike Bond.   There were so many times I thought I was reading a comedy.     Zack, Steve, and Curt are all men who have successful lives with hidden secrets.   They steal a drug-lords cocaine with the plan to sell it and get rich.    This is where the story went crazy.   Zack and Steve, the two with the cocaine, were clueless.   They think it would be quick to head to Vegas or New York and sell it out of the back of their cars.    DUH!  Nothing is that easy, especially with a drug-lord searching for their drugs.

I liked the locations.   The mountains of Denver were portrayed beautifully.   The excitement, lights, and casinos in Vegas were shown in their true ways.    The little bit of time in New York was busy and chaotic just as I picture life living there.    I find that the way an author sets the book in the location often makes a huge difference to me.   If the locations are believable, realistic, and true to life I find myself picturing them as I read.   Mike Bond did a great job bringing the reader into the book through his descriptions of the surroundings.

Thank you Tracy G. Minsky of Meryl Moss Media for a copy of the book in exchange for an honest review.

MIKE BOND is the bestselling author of Saving Paradise, House of Jaguar, The Last Savanna, Holy War, Tibetan Cross,Killing Maine, and Assassins. He is a war and human rights journalist and ecologist who has lived and worked in many dangerous and war-torn regions of the world. His critically acclaimed novels depict the innate hunger of the human heart for good, the intense joys of love, the terror and fury of battle, the sinister conspiracies of dictators, corporations and politicians, and the beauty of the vanishing natural world.

“The master of the existential thriller.”
– BBC
“Grips the reader from the very first chapter until the climactic ending.”
– UPI

“Will make readers sweat with its relentless pace.”
– Kirkus

“A master of the storytelling craft.”
– Midwest Book Review

“Grips the reader from the opening chapter and never lets go.”
– Miami Herald

“One of the 21st century’s most exciting authors.”
– Washington Times