About A Certain Age by Beatirz Williams

About A Certain Age 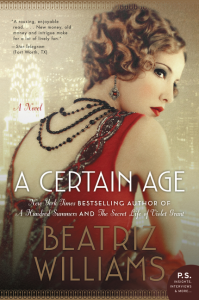 The bestselling author of A Hundred Summers brings the Roaring Twenties brilliantly to life in this enchanting and compulsively readable tale of intrigue, romance, and scandal in New York Society, brimming with lush atmosphere, striking characters, and irresistible charm. As the freedom of the Jazz Age transforms New York City, the iridescent Mrs. Theresa Marshall of Fifth Avenue and Southampton, Long Island, has done the unthinkable: she’s fallen in love with her young paramour, Captain Octavian Rofrano, a handsome aviator and hero of the Great War. An intense and deeply honorable man, Octavian is devoted to the beautiful socialite of a certain age and wants to marry her. While times are changing and she does adore the Boy, divorce for a woman of Theresa’s wealth and social standing is out of the question, and there is no need; she has an understanding with Sylvo, her generous and well-respected philanderer husband. But their relationship subtly shifts when her bachelor brother, Ox, decides to tie the knot with the sweet younger daughter of a newly wealthy inventor. Engaging a longstanding family tradition, Theresa enlists the Boy to act as her brother’s cavalier, presenting the family’s diamond rose ring to Ox’s intended, Miss Sophie Fortescue—and to check into the background of the little-known Fortescue family. When Octavian meets Sophie, he falls under the spell of the pretty ingénue, even as he uncovers a shocking family secret. As the love triangle of Theresa, Octavian, and Sophie progresses, it transforms into a saga of divided loyalties, dangerous revelations, and surprising twists that will lead to a shocking transgression . . . and eventually force Theresa to make a bittersweet choice. Full of the glamour, wit and delicious twists that are the hallmarks of Beatriz Williams’ fiction and alternating between Sophie’s spirited voice and Theresa’s vibrant timbre, A Certain Age is a beguiling reinterpretation of Richard Strauss’s comic opera Der Rosenkavalier, set against the sweeping decadence of Gatsby’s New York.


Beatriz Williams has an absolutely amazing way of taking the reader directly into the time and place that her characters are living their lives.    With A Certain Age we are taken to the roaring 1920’s in Manhattan.   It is the time of prohibition, jazz music, and women coming into their own.

A Certain Age is told in alternating perspectives of Theresa and Sophie, who is engaged to Theresa’s brother.    These woman are complete opposites of each other.    Theresa has been jaded and knows what is expected of her.    Sophie has lived a life of shelter without a mother and a father who is very controlling.      I found myself looking forward to Sophie’s side of the story.

Theresa Marshall is married to a man who has a mistress.    Their relationship is open, as in they can both find other people to enjoy on the side, but it is never to be brought in their own homes or into the public eye.      The Marshall family is part of the elite in Manhattan.        Theresa’s side piece is Octavian Rofrano or Boy as she calls him.       I didn’t like Theresa.    I felt like she was conniving, always wanting to get her way at the expense of others.  I am not even sure she loves Octavian until he starts to pull away, which is her own doing.

There are family secrets, murders, affairs, and romance.     I liked that it was told about women in a time when women were to be quiet, mothers/wives, and take care of the households.    It was refreshing to see the women step out against society rules and stand up for themselves.

A graduate of Stanford University with an MBA from Columbia, Beatriz Williams spent several years in New York and London hiding her early attempts at fiction, first on company laptops as a communications strategy consultant, and then as an at-home producer of small persons, before her career as a writer took off. She lives with her husband and four children near the Connecticut shore. Find out more about Beatriz at her website, and connect with her on Facebook, Twitter, and Instagram.
Posted by A Soccer Mom's Book Blog at 3:00 AM