The Dressmakers Dowry by Meredith Jaeger 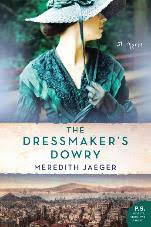 About the book:
An exquisite ring, passed down through generations, connects two women who learn that love is a choice, and forgiveness is the key to freedom...

Immigrant dressmakers Hannelore Schaeffer and Margaret O’Brien struggle to provide food for their siblings, while mending delicate clothing for the city’s most affluent ladies. When wealthy Lucas Havensworth enters the shop, Hanna’s future is altered forever. With Margaret’s encouragement and the power of a borrowed green dress, Hanna dares to see herself as worthy of him. Then Margaret disappears, and Hanna turns to Lucas. Braving the gritty streets of the Barbary Coast and daring to enter the mansions of Nob Hill, Hanna stumbles upon Margaret’s fate, forcing her to make a devastating decision...one that will echo through the generations.

In her elegant Marina apartment overlooking the Golden Gate Bridge, Sarah Havensworth struggles to complete the novel she quit her job for. Afraid to tell her husband of her writer’s block, Sarah is also hiding a darker secret—one that has haunted her for 14 years. Then a news headline from 1876 sparks inspiration: Missing Dressmakers Believed to be Murdered. Compelled to discover what happened to Hannelore and Margaret, Sarah returns to her roots as a journalist. Will her beautiful heirloom engagement ring uncover a connection to Hanna Schaeffer?

Two women, two storylines, and two different era’s.    Hanna, 1876, and Sarah, present time, are entirely different women with entirely different lives.     Hanna is poor, working to feed and clothe her siblings and keep her drunk father from abusing them.   Sarah has married well and is working on her thesis.   The thesis is what pulls these two stories together.   Sarah’s thesis is the story of Hanna and Margaret, Hanna’s friend who goes missing.

There were times that I wondered exactly how these two stories would come together, what would bind them.    I kept reading, not able to stop with the need to find out what happen to Hanna and Sarah.     I found the 1876 story line more intriguing to me.     I was interested in how Hanna would be able to take care of her siblings in a time when the only job women could do is sew or whore themselves.      Sarah was a character that I struggled to connect with.      I knew there was more to her, something that was keeping her from being honest, but I couldn’t figure out what it was until it was revealed.

San Francisco is described in great detail, especially in the 1876 timeframe.    I could picture the stores, the markets, the whorehouses, and the ragged homes Hanna and Margaret were growing up in.      The details were perfectly shared so that I could see exactly what the characters were seeing.       I felt like I was walking the streets with them, the fear of being mugged, the drunks approaching, and the history of the era were real to me.

The Dressmakers Dowry is a quick read.   The words flow, the story moves along.   I recommend picking up your own copy.

Meredith Jaeger has lived and travelled around the world, spending periods in the Netherlands, the Czech Republic, and Australia. She is a native of the San Francisco Bay Area, born and raised in Berkeley, California. A graduate of the University of California, Santa Cruz, Meredith holds a BA in Modern Literature. While working at a San Francisco startup, Meredith fulfilled a lifelong dream to write a novel, the result of which was The Dressmaker’s Dowry. Like the character Hannelore Schaeffer, Meredith is also the daughter of a European immigrant, who moved to California in search of a better life. Meredith lives in the San Francisco Bay Area with her husband, their infant daughter, English bulldog and elderly cat.


“This gripping read is a satisfying exploration of the timeless nature of love and resilience.”
—Booklist (STARRED review)