Spotlight of Accidents of Marriage by Randy Susan Meyers...

Accidents of Marriage is now available in paperback.   In celebration of the release, I wanted to share my review again and make sure everyone knows.    Randy Susan Meyers is also hosting an event in Boston .   I know that I would love to go, but it is a long trip between Boston and Illinois. 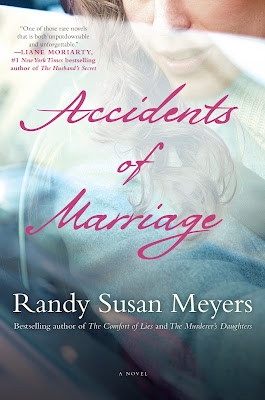 Best-selling local author Randy Susan Meyers launches the paperback release of her critically acclaimed book,ACCIDENTS OF MARRIAGE with actress (The Sopranos) Marianne Leone, author of KNOWING JESSE: A MOTHER’S STORY, and Leone’s husband Oscar winner Chris Cooper, on June 18 at 7 p.m. at Bella Luna Restaurant at 284 Amory Street in Jamaica Plain. This event benefits AccesSportAmerica and is also hosted by Papercuts Bookstore and Westwinds Bookshop. It will include a reading and discussion on “Remarkable Fathers and Family” – just in time for Father’s Day, as well as prizes and entertainment.  The June 18 event at Bella Luna is free to the public.

AccesSportAmerica is a national nonprofit based in Massachusetts promoting higher function and fitness for children and adults of all disabilities through high-challenge sports and training. Book sales will be matched and donated to AccesSportAmerica.

Meyers seeks out connections between her novels and the groups to whom she donates. Highlighting the wide-ranging effects of traumatic brain injury, ACCIDENTS OF MARRIAGE is the story of a Boston family affected by the mother, Madeline’s, brain injury that occurred at the hands of her husband’s angry driving. Adding to the connections, Randy Susan Meyers met Madelyn Bronitsky at a book event. An expected guest at the book launch, Ms. Bronitsky is a real-life traumatic brain injury (TBI) survivor, whose background is so similar to that of the character of Madeline described in ACCIDENTS OF MARRIAGE that Meyers’ recent piece for The Huffington Post features her, and describes their connection in “Madelyn & Madeline: When a Character Pops Out of Your Book.”

The event’s raffle prizes include:

Meyers and actress Leone met and became friends when they fell in love with each other’s books. KNOWING JESSE: A MOTHER’S STORY is the story of Leone and Chris Cooper’s son who suffered with cerebral palsy. In fiercely honest, surprisingly funny, and sometimes heartbreaking, prose, Jesse’s mother chronicles her transformation by the remarkable life and untimely death of her child.

Meyers’ book received a coveted starred review from Kirkus, it was People’s weekly pick and the Boston Globe wrote “Meyers deftly deploys a large cast of major and minor characters in telling this complex story. Her painstaking description of both emotional abuse and brain injury are impressive. ACCIDENTS OF MARRIAGE isn’t for anyone who insists on happy endings, but it rewards readers in deeply satisfying ways.”

Meyers, who lives in Boston, is also the author of THE COMFORT OF LIES and THE MURDERER’S DAUGHTERS and was a finalist for the Massachusetts Book Award.  She is a frequent contributor to The Huffington Post. http://www.randysusanmeyers.com/accidents-of-marriage/

What other's are saying about Accidents of Marriage

“This novel’s unsparing look at emotional abuse and its devastating consequences gives it gravity and bite, while a glimpse into a physically damaged mind both surprises and fascinates.”—PEOPLE Magazine

“A deft exploration of the borders of abuse and the aftermath of tragedy, the triumphs and disappointments of recovery, and the possibilities of faith and forgiveness.”
—Star Tribune

Exploring emotional abuse and traumatic brain injury with unblinking honesty, ACCIDENTS OF MARRIAGE (Atria Books; Trade Paperback; June 9, 2015) is a blindingly clear and immediately engaging account of life inside of a marriage and the choices that can make the difference between living in hell and salvation.

The latest page turner from Randy Susan Meyers, ACCIDENTS OF MARRIAGE never lets go of the reader from the first page to the last. For Madeline Illica, the love of her husband Ben was her greatest blessing and biggest curse. Brilliant and charming Ben could turn into a raging bull when crossed—and despite her training as a social worker Maddy never knew what would cross him. When Ben was in a conciliatory mood, they worked on techniques for communication and anger management but on the day of the accident, nothing seemed to help. He was furious at having to drive Maddy to work, the road was wet, and that SUV was in the wrong place at the wrong time. Ben never meant for them to go off the road or for Maddy to go flying through the windshield.

Now she’s on a ventilator in intensive care and no one knows if she’ll reawaken from her coma and, if she does, whether she’ll ever be her old self. Maddy’s family blames Ben. Maddy’s friends blame Ben. The children blame Ben. Ben blames Ben—and he is sick to the pit of his soul over the fear of losing his one true love.

Fourteen-year-old Emma sees things a little differently. She desperately misses her mother but misses being a teenager more as she’s forced to pick up the slack from Ben and parent her younger siblings Gracie and Caleb. On the cusp of coming of age, she needs Maddy so she can discuss the hard decisions she’s being forced to make. And her confrontations with her volatile father are growing more heated by the day.

RANDY SUSAN MEYERS is the author of The Comfort of Lies and The Murderer’s Daughters and a finalist for the Massachusetts Book Award. Her writing is informed by her work with batterers and victims of domestic violence, as well her experience with youth impacted by street violence. She lives with her husband in Boston, where she teaches writing seminars at the Grub Street Writers’ Center. She is also a frequent contributor to The Huffington Post.