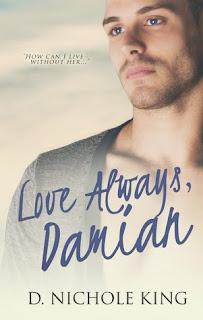 They say time heals all wounds. What a load of bull. It’s been four years, and Kate’s voice still echoes in my mind. Every. Damn. Day. I numb her memory when it taunts me. In college, I drown her out with booze and easy lays. I can’t do what she asked. I can’t let her go. Not even when Lia shows up, freaking ripping what’s left of me to shreds. Caring about someone isn’t worth the deadness that follows after they’re gone. I didn’t ask for this. Didn’t ask for her. And I sure as hell didn’t plan to miss her when she walked out of my front door. Now, if I want to keep her, I have to straighten myself out and earn her. I can’t screw this up. Because if I do, I’ll lose more than just Lia. I’ll lose my life…

Let me start by saying that I was lucky enough to get all three books in this series at the same time, I highly suggest reading them  in order, but Love Always, Damian can be read as a stand-a-lone.  With the first book I was in tears throughout so much of the story.   The second was just a short add on to the story from book one.   The second was the rest of the Kate, Damian, and Ellie’s story.

Love Always, Damian is amazing.    D. Nichole King writes in such a heartfelt way.    I was pulled in from the very beginning.    There is nothing easy about writing a story that involves cancer, lost of love ones, and the grief that comes from losing them.    This story was written with such care, such understanding, and such grace that it was not as hard to read as I expected.

I was entirely shocked when Lia came into his world and change him entirely.    The struggles he had were real.   He had to re-evaluate his entire life.   Lia truly saved his life.  I shudder to think of where he would have ended up without her.   The path to destruction was the only way he knew how to live his life after losing Kate, I prayed and hoped that something or someone would come along and change his path.   He had a lot to live for, yet could not see it without help.

This is a book that I highly recommend.    It is a book that will open your eyes to how people handle grief, how one person can change your world, and how friends can make a difference. 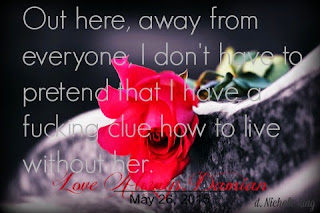 ••*´¨`*•.☆•Excerpt••*´¨`*•.☆•
It takes me an hour to get to the cemetery. After Mom and Liam died, I never stepped foot here. Not until Kate convinced me to come. It had been one of her five wishes. One through three I’d done because she was with me. Because I loved her. I promised her number four, so I followed through. Number five, though?
Number five is impossible.
I come here often now—day, night, whenever I need to be close to her. Even in death, Kate draws me in. To this place where she’d only trodden once when she was alive.
I grab the three bouquets of flowers from the passenger seat and swing the door open. When Kate brought me here four years ago, I barely managed to get out of the car. Now it’s easy.
Too fucking easy.
I don’t even think about coming anymore. It’s automatic. Routine, like my nightly shots of whiskey.
It shouldn’t be like this. In three short years I lost the three people I loved most. Death sucks, and I’ve had my fill.
I slam the door closed and tread over the grass. The three identical stones jut up from the ground, and even when I’m here after dark, I don’t have a problem seeing them. They’re etched into my memory.
The idea to have Kate buried here beside my mother and brother was entirely mine and entirely selfish. The Browdys had asked me to help with her funeral arrangements, and other than the time of the graveside service, this had been my only request. This way she’d be close to me.
Shade from the elder tree casts a shadow over them. I stand inside its cover from the sun, facing the cold memorials. These pieces of granite have no real connection with the people they were.
Hell, they didn’t even pick them out. Didn’t see them, yet their names, dates of birth and death are etched into them as if they’d been owned by those they claim to represent.
Cemeteries—these stones—aren’t for the dead.
No, they’re for the living.
My gaze trails over the Celtic symbols engraved at the center of each one. Identical to the tattoos inked into my body. Faith. Brotherhood. Hope.
My eyes linger on Kate’s as they usually do, and the memory of when I’d given her the trinity heart necklace pours over me.
“It’s the Celtic symbol for hope. Now you’ll always know where to find it,” I’d told her.
Damn. I’d given it to her so she’d think of me whenever she needed me, but really, it was I who needed her.
I take a deep breath to hold myself together. I lost everything the day Kate died.
I rake a hand through my hair and shut my eyes. Out here, away from everyone, I don’t have to pretend that I have a fucking clue how to live without her.
Out here, it’s just me.
In front of Kate’s gravestone, I lower myself to the ground, dropping the flowers at my side. My chest is empty, yet somehow, it hurts. It’s the same damn thing year after year—aching to see her smile at me just one more time. One more and I’d be satisfied, I tell myself.
I know it’s a lie because one more smile from her would never be enough. I need to touch her, run my fingers over her warm skin and protect the hell out of her.
But I’m a failure. I had the power within me, in my blood, to save her, and I failed.
I can barely see the inches in front of me as I break down. Four years ago, my father sat here with me and told me the pain would never go away, but it would lessen over time.
What a load of bullshit; the pain has only grown.
“I miss you so damn much, Katie,” I say even though she can’t hear me. And that thought kicks me in the gut as much as anything. No matter what I say to her now, she’ll never know any of it.
I slide my fingertips over her name: Kathryn “Katie” Browdy. Seventeen short years on this earth and I only had her last months. They were the best months of my life.
I sit with her until the sun begins to send streaks of gold over the horizon. Even though Kate would be disappointed, I need to pick up more liquor before I head home. I have to have something to get me through this pain.
A gust of wind rustles the dead flowers I left on their graves last week. I scoop them up and replace them with the fresh ones I brought. Daisies for my mother, some generic flowers he wouldn’t give a shit about for Liam, and red roses for Kate.
Always red roses for my Katie.
“Love you, Mom,” I murmur, fanning out the daisies in the vase beside her headstone.
Then I move onto Liam’s. “Take care of my girl, man,” I tell him, then I remember how I’d taken care of his. “But if you touch her, I’ll fucking kill you.”
I squat down and lay Kate’s roses at the base of her stone. There’s nothing I could say to her that I haven’t already said a million times. So I settle for the words I couldn’t say until just before she died. “I love you, baby. I’ll always love you.” 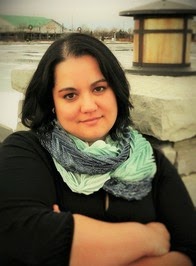 Since I was born and raised in Iowa, I like to create stories where my home state is the setting. There's nothing like small-town Midwest scenery to create the perfect backdrop for an amazing tale!I've always loved to read and write. I'll read anything: Classics, fantasy, contemporary, mystery, horror. It doesn't matter as long as it draws me in. As a kid, I was raised on authors such as Lurlene McDaniel, R.L. Stine, Danielle Steele, Mary Higgins Clark, Stephen King, and Shakespeare.Writing-wise, my fondness lies in the YA/NA genre, though I do have a couple of women's fiction stories swimming around in my head. When not writing, I'm usually curled up with a book, scrapbooking, or doing yet another load of laundry.Along with my incredible husband, I live in small-town Iowa with my four adorable (yet ornery) children and our dog, Peaches.