Halligan To My Axe by Lani Lynn Vale 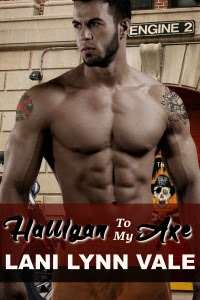 Kettle had it all. Until he didn’t.
He lost it all in a moment. One heart stopping, soul shattering moment, and there wasn’t a single thing he could do about it.
From that day forward, he stayed away from relationships.
Then he responded to a possible fire and there she was, rocking his world when he didn’t want it to be rocked.

Adeline was just a schoolteacher. She lived a boring life.
Until she stole something.
And it didn’t have anything to do with the sexy firefighter’s heart.
Oh, she stole that, too, even if he didn’t want it to be stolen.

Kettle didn’t realize just what kind of trouble Adeline was in until it nearly ripped her from his life.
There was no way anything was taking that away from him.
Not again.
One man was about to see up close and personal what fury looked like on the face of The Dixie Wardens MC’s enforcer.

I love Lani Lynn Vale.   I have read many of her books and have never been let down.    When I see a book by her I know that I am going to get a hot, steamy, romance story with lots of action.   I also know that there will be plenty of Alpha Males and strong females characters.  I LOVE IT ALL!

In Halligan to my Axe, I related to Adeline.   She was a normal person, enjoying life, and the sexy man who went for frequent runs while shirtless.    Then her family enters the story and her life is not so normal.   She is amazing.  Going out of her way to help her almost blind twin and turning a blind eye to her troubled brother.     When fireman, Kettle, comes to her rescue a few times, I knew that her life was about to be rocked and rolled.

Kettle, sigh.   He is the man of every womans dreams.    Hot, sexy, fireman, and a family man too. While he could have been made too good to be true, Lani Lynn Vale made him real.  He struggles with relationship with his parents, while keeping a close and protective eye on his sister.     He reacts then thinks and it doesn’t always work in his favor, just as many people experience.
I cannot help but gush over this story.  It is quick, easy and very steamy hot!   It did not take me long to read, less than a day, and I was left wishing for so much more.    Definitely pick up this book!

Lani Lynn Vale is a married mother of three living in the greatest state in the world, Texas. She is currently a student pursuing her bachelor’s degree in nursing. When she’s not cooking, cleaning, wiping dirty faces free of permanent marker stains, going to school, or running errands, you can find her at her computer lost in her fictional character’s world.
Blog | Facebook | Twitter | Goodreads