Cover Reveal for Bring on the Bubbly by Jayne Wilder 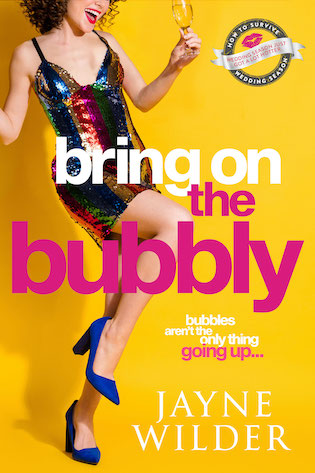 A sizzling romance with snort-laughs and a satisfying happily ever after, you’ll want BRING ON THE BUBBLY as your next wedding season romcom.

Aly Reed has the hottest ticket in town—nine hand-lettered ones, in fact! This wedding season, she finally has a date—her perfect boyfriend. It’s a lovely distraction from the soulless day job that’s leading her farther from her dreams of becoming a graphic designer. All the happy, betrothal vibes torpedo down the toilet when Aly catches her boyfriend cheating—at wedding number one!

Enter Lex, the swoony caterer whose chocolate fountain collides with Aly. Dumped and splattered in chocolate, it’s a meet-not-so-cute she’d love to forget. Except she can’t, because Lex caters wedding number two, where Aly’s seated next to her ex—and his new girlfriend. While hiding from them, she and Lex share a surprisingly sexy moment and strike a deal. Lex will spare Aly the torture of a solo wedding season and in return, she’ll do the branding for his new food truck.

But between champagne toasts and moonlit dances, their arrangement goes from simmer to flambé. Aly realizes she wants more than seconds of her hot chef. Can this romance last beyond wedding season? One thing’s for sure—it’s time to bring on the bubbly!

A quirky, endearing heroine, a chef with great hands, and the sexiest rowboat around.

This is Aly and Lex’s stand-alone from the How to Survive Wedding Season series. The view of Jayne's 20's looks pretty good from this distance: joyous weddings, tawdry romances, the search for purpose, and cheap wine. Living it once was quite enough, thank you. While the wine is (nearly) the same, fictionalizing this time in life for her characters is freaking fantastic!