Book Review for The Shop on Royal Street by Karen White

The Shop on Royal Street by Karen White

After a difficult hiccup on her road to adulthood, Nola Trenholm is looking to begin anew in New Orleans, and what better way to start her future than with her first house? But the historic fixer-upper she buys comes with even more work than she anticipated when the house's previous occupants don't seem to be ready to depart. Although she can't communicate with ghosts like her stepmother, luckily Nola knows someone in New Orleans who can--even if he's the last person on earth she wants anything to do with, ever again. Because Beau Ryan comes with his own dark past, a past that involves the disappearance of his sister and parents during Hurricane Katrina, and the unsolved murder of a woman who once lived in the old Creole Cottage Nola is determined to make her own whether or not the resident restless spirits agree...

My Thoughts:  I was so sad when Karen White ended her Tradd Street novel but even more excited when I heard she was starting a new series featuring Nola.  But… would the new series live up to the original?  YES!  It lived up to it and is just as amazing.   The paranormal appearances were perfect, and Noal and the other characters have a wonderful story to tell.

I was so intrigued by the house Nola was compelled to purchase.  From the first steps inside there was no doubt that there was another presence there.   I needed to know what the presence was and how was it connected to Nola and Beau.  I loved putting the clues together to solve the mystery and am happy to say that I had it mostly put together.

Mimi, Beau’s grandmother, was interesting.  Her character is one that I am hoping for more of in future books in this series.  I feel like she has a lot more to share.   Her story has to have more to it, her life has to be very unique and interesting.

The ending... AMAZING!  Leaving me ready for book two.   What a twist.  I had no idea that was where the story would end.

**Thank you Dache' J. Rogers at Berkley for a copy of the book in exchange for my honest review. 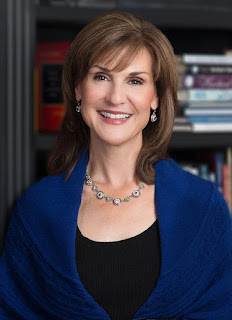 Meet Karen White: (Taken from Karen’s website) Karen White is the New York Times and USA Today bestselling author of 31 books, including the Tradd Street series, The Last Night in London, Dreams of Falling, The Night the Lights Went Out, Flight Patterns, The Sound of Glass, and A Long Time Gone. She is the coauthor of All the Ways We Said Goodbye, The Glass Ocean and The Forgotten Room with New York Times bestselling authors Beatriz Williams and Lauren Willig. She grew up in London but now lives with her husband near Atlanta, Georgia.

Karen’s next book, The Shop on Royal Street, is due out March 29th and is the first book in a brand new series set in New Orleans and starring Nola Trenholm from the Tradd Street series.  Following on May 17th will be the publication of the fourth collaboration with Beatriz Williams and Lauren Willig, The Lost Summers of Newport.

When not writing, Karen spends her time reading, singing, and avoiding cooking. Karen and her husband have two grown children and a spoiled Havanese dog, Sophie, and divides her time between Atlanta, Georgia and the northwest Florida coast.