Review of Dad by Steven Manchester 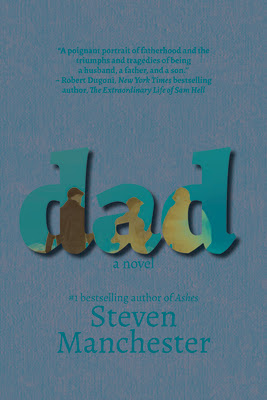 From Goodreads:  Three generations of dads, playing traditional roles in each other's lives, arrive simultaneously at significant crossroads. The decisions they make and the actions they take will directly - and eternally - affect each other. After a life of hard work and raising children, Robert is enjoying his well-deserved retirement when he discovers that he has an illness he might not be able to beat. At 19, Jonah is sprinting across the threshold of adulthood when he learns, stunningly, that he's going to become a father. And Oliver - Robert's son and Jonah's dad - has entered middle age and is paying its demanding price. While reconciling the time and effort it has taken him to reach an unfulfilling career and an even less satisfying marriage, he realizes that it's imperative that he keep it all together for the two men who mean everything to him. When different perspectives lead to misunderstandings that remain unspoken - sometimes for years - it takes great strength and even more love to travel beyond the resentment. Dad: A Novel chronicles the sacred legacy of fatherhood.

My Thoughts:  Oh, my heart.   I knew when the story started I’d be ripped up, torn apart, and then slowly put back together.

I felt like this was Oliver’s story.   He is the son dealing with his father’s end of life.   He is the father dealing with his children becoming adults and how that changes their relationships.    He is the husband learning how to be with his wife.    Oliver’s father, Robert, gives him advice and encouragement through all of these life happenings but Robert’s time is limited.   The advice must come quickly and without judgement.

I had tears as I took in the story and saw how it mirrored some of my life.   I could see a lot of my father in Robert and loved that the love between Robert and Oliver was obvious.  The story was not always easy to read, there was tough topics, and end of death decisions being made but the story was respectful, truthful, and full of love.  Steven Manchester has written another master piece that will stay with me, keep me thinking about it, and have me recommending it often.

**Thank you Steven Manchester for a copy of the book in exchange for my honest review.

After returning home from a difficult tour of duty in Operation Desert Storm in 1991, I stepped back behind the walls of a Massachusetts penitentiary where I battled each day as a prison investigator. Needless to say, there was great negativity in my life at that time, and very little opportunity to heal from my wartime demons (or pursue my dreams of being published). I finally decided to return to college to finish my degree in Criminal Justice. During one of the classes, my professor, Barry McKee, detailed police work, but barely touched on other topics. I finally raised his hand and asked, “As the criminal justice system is so vast, what about the courts, probation, parole – corrections?” Barry smiled and told me to see him after class. I thought I’d done it! In his office, Barry explained, “Except from the slanted perspectives of inmates, there’s no real written material out there on corrections, or prisons.” Barry smiled again and then dropped the bomb that would change my life forever. “If you’re so smart,” he said, “why don’t you write it?” It was the last push I needed to get writing. Nine months later, I placed the first draft of 6-5; A Different Shade of Blue (under the pen name, Steven Herberts) on Barry’s desk. From then on, I was hooked. I was a writer.

Today, 25 years later, I am the author of four #1 national bestsellers: Twelve Months, The Rockin' Chair, Pressed Pennies and Gooseberry Island. My long-anticipated, critically-acclaimed novel, The Changing Season, has just been released. I’m also the author of the award-winning novel, Goodnight, Brian, while my work has appeared on NBC's Today Show, CBS's The Early Show, CNN's American Morning and BET's Nightly News. Three of my short stories were selected "101 Best" for Chicken Soup for the Soul series and I’m the produced playwright of Three Shoeboxes.

When not spending time with my beautiful wife, Paula, or our four children, I’m either promoting my works or writing.