Spotlight for The Portrait by Ilaria Bernadini

The Portrait A Novel by Ilaria Bernadini

“Electric. A wildly astute plunge into the depths of love, rivalry, betrayal and the power of women.”

“A delicious final revelation… adds poignancy to Bernardini’s portrayal of these women’s reckoning with love and loss. This engrossing outing will impress and surprise readers.”

"The Portrait is a meditative, illuminating novel that pushes the boundaries of love and art." 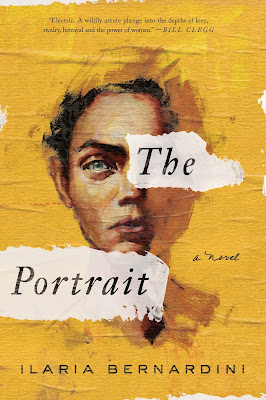 I’m thrilled to share with you the American debut from breakout Italian novelist Ilaria Bernardini: The Portrait, which Pegasus will publish January 5th, 2021. Already winning praise across Europe and in the U.K., The Portrait is an ambiguous, electrifying story of a lover, a wife, and the man they have in common.

The Portrait tells the story of an internationally renowned writer, Valeria Costas, who has dedicated her life to her work and to her secret lover, Martìn Acla, a prominent businessman. When his sudden stroke makes headlines, her world implodes. Desperate to find a way to be present during her lover’s final days, Valeria commissions his artist wife, Isla, to paint her portrait – insinuating herself into Martìn’s family and home.

While the man these two women share – husband, father, lover – lies in a coma, Valeria and Isla remain poised on the brink, transfixed by one another. In the unique intimacy that arises between artist and sitter, the two women reveal truths, fragilities and strengths. But does Isla know the truth about Valeria and Martin? And what secrets does Isla harbor? Amidst their own private turmoil, the portrait takes shape alongside our understanding of these complex and extraordinary women. In the vein of Elena Ferrante’s Neapolitan Novels, The Portrait is in an unforgettable, breathless tale of deception and mystery that captivates until the very end.

About the Author: Ilaria Bernardini is a prolific talent in Italy, where she has published eight novels, including Faremo Foresta (“We Will Grow a Forest”) which was longlisted for Italy’s prestigious Strega Prize. The Portrait has also been longlisted for the Strega Prize, nominated by Academy Award winning director Paolo Sorrentino (“The Great Beauty”). She is a Vogue Italia columnist and regular contributor for Rolling Stone. Ilaria also co-wrote the late renowned director Bernardo Bertolucci’s last film, The Echo Chamber. She splits her time between London and Milan.
Posted by A Soccer Mom's Book Blog at 12:00 PM