Review for Without a Brew by Ellie Alexander

Without a Brew (Sloan Krause #4) by  Ellie Alexander 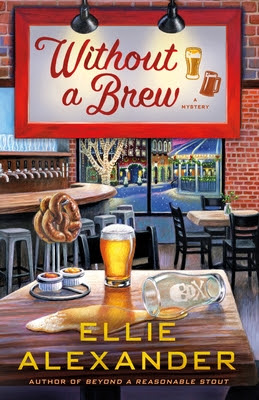 Amateur sleuth Sloan Krause delves into a murderous winter wonderland in another delightful mystery from cozy writer Ellie Alexander, Without a Brew.

It's winter in the Bavarian village of Leavenworth, Washington, which for local brew master Sloan Krause means lots of layers, pine and citrus-flavored craft beers, and getting the new guest rooms at Nitro into pristine condition before visitors flood in for IceFest—a local tradition filled with fireworks, ice carving, and winter games of all varieties. But Sloan and her boss Garrett quickly learn that being brewkeepers turned innkeepers may not be as idyllic as it sounded.

While one couple staying with them seems completely smitten, a flashy group arrives in the evening demanding rooms. Sloan and Garrett are less than impressed but agree to rent to them anyway. The night takes a turn when brewery patron Liv Paxton finishes her frothy pint and, with no previous plan for an overnight stay in Leavenworth, eagerly takes Sloan up on the offer of sanctuary from the snow—until she has a strange run in with some locals and the other guests. Sloan could be imagining things, but when Liv's room is found trashed the next morning, a hateful message painted on her car, and Liv herself is nowhere to be found, Sloan is convinced another mystery is brewing. With many of the potential suspects hunkering down under Nitro's roof, she knows her co-workers and friends won't be safe until she serves up the killer a hoppy pint of justice.

A book set around a brewery is the perfect book for me.   Add in the skiing and winter setting and I am won over!    Without a Brew is part of the Sloan Krause series, which is new to me.   I started reading and quickly became engrossed in the plot, the characters, and the wonderful setting.

A murder happens when the brewery takes the next step to become an inn.   Their guests become anxious, clues start to come to light pointing the blame at various guests, and tensions are high.   Yet, Sloan knows that she can help figure out the who-dun-it.   I could see her mind working as she chatted with guests, followed clues, and tried to put it all together.    It seemed that every person she talked to have a reason, a way, and a different story to tell.

Without a Brew is a quick and fun book.  I loved the setting, the characters, and the twists and turns of the storyline.

**Thank you to Allison Ziegler at Minotaur Books for a copy of the book via NetGalley in exchange for my honest review. 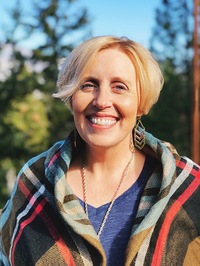 Ellie Alexander (also known as Kate Dyer-Seeley) is a Pacific Northwest native. Her love for the Pacific Northwest runs deep. Hence why all of her books (whether she’s writing as Ellie or Kate) are set here. From the Shakespearean hamlet of Ashland, Oregon to the Bavarian village of Leavenworth, Washington to the hipster mecca of Portland, Oregon and a variety of other stunning outdoor locales, the Pacific Northwest is a backdrop for every book and almost becomes another character in each series.

When not writing, you can find her testing pastry recipes in her home kitchen or at one of the many famed coffeehouse or brewpubs nearby. You’ll also find her outside exploring hiking trails and trying to burn off calories consumed in the name of “research”.

Ellie loves hearing from readers and interacting on social media. Be sure to follow her to learn about her writing process, upcoming books, special events, giveaways, and more! Also, sign up for her e-mail newsletter to stay up to date on new releases, appearances, and exclusive content & recipes.