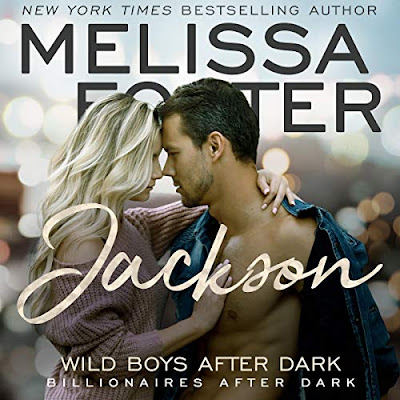 Receiving a marriage proposal is supposed to make a women happy, but when Erica "Laney" Lane receives a beautiful marriage proposal from her perfect boyfriend on the eve of her annual camping trip with her best friend, Jackson Wild, the first thing she does is jump into bed with Jackson.

Jackson's all too happy to screw the annoyance out of Laney. After all, they've always screwed the hell out of each other when they were bored or angry, lonely, or too damn drunk to see straight.

But the marriage proposal changes everything, and their annual camping trip takes unexpected turns. Will a few nights in the wilderness set these friends with benefits free, or lead them on a path of destruction?

Audiobook Review..If you have not listened to Paul Woodson as a narrator you are missing out.    Give Paul the amazing words of Melissa Foster and you have a story that you will not be able to turn off.    The character of Jackson is all Alpha Male.    Paul is able to use his voice to not only show how alpha he is but also how loving, sweet, and caring he is.     I cannot imagine it is easy to read a book with so much emotion, with male and female characters, and with so much heat.   But this narrator is absolutely amazing.   If you love audiobooks or if this is your first audiobook I recommend jumping in and listening immediately.

eBook Review…When your best friend is of the opposite sex things can get messy. Jackson and Erica are all friends with benefits and are all good with that until that is put on the line. When Erica gets engaged it would mean that their arrangement would end. They could stay friends but no more benefits. This throws Jackson off. He believes that he is not marriage material. He doesn’t want to commit to anyone, but he isn’t wanting Erica to commit either.

I found it interesting that feelings can come to the surface when push comes to shove. I believe these two would have continued as they were if Erica did not unintentionally give Jackson a push. It was tough to watch him struggle and see their friendship struggle and almost fall apart. I was praying for a happy ending for these two.

If you are familiar with Melissa Foster you have an idea what to expect. Beware that this series is a little hotter and a little sexier. Things are more graphic and the men steamier. I have said that I am in lust with the men in this series.

Get your own copy at…