Review for Stuck With You by Moni Boyce

For Maddie and Jack, attending their high school reunion turned into a reservation mix up and an unexpected stay in a cozy cabin, together. Can enemies turn into lovers over the course of a week? Find out in this must-read enemies to lovers, forced proximity romance from Moni Boyce. The Holiday Springs Resort series is here and STUCK WITH YOU is now live! 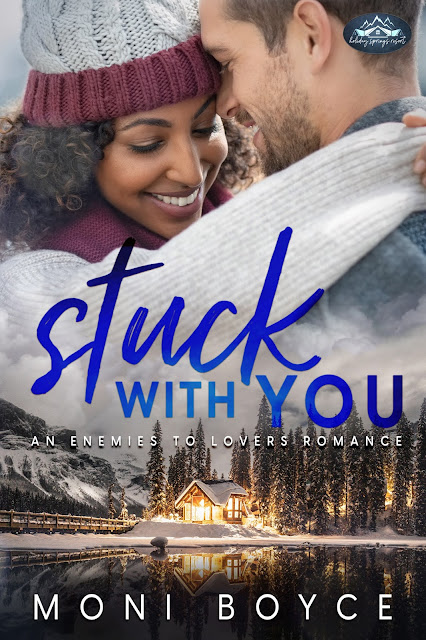 Can enemies turn into lovers over the course of a week? Maddie When I decided to attend my high school reunion, I knew I’d run the risk of running into Jack Carter. Mr. Big Time Country Music Star. The same guy that broke my heart in high school. What I didn’t expect was that the resort would mess up our reservations, and we’d end up roommates. Now I’m stuck sharing a cabin with him for the next week, and I don’t know whether I want to kill him or kiss him. Jack What are the odds I would end up sharing a cabin with my ex-high school sweetheart, Maddie Grace? The woman was a sweet tomboy back then, now she’s a knockout, uptight lawyer, who loves to argue. Even though we fight like cats and dogs, I’m feeling that familiar old spark and the more time I spend with her, the more I’m beginning to think letting her go was my biggest mistake. Thanks to a little mix-up at the resort, I've now got a week to prove to her that we belong together and you can bet I'm going to give it my best shot.
Escape to the romantic paradise of Holiday Springs and warm up with your next happily ever after.

High school sweethearts that went different directions come back together at a reunion.   A mix up in reservations has them sharing the same cabin and old feelings comes back, hurt feelings are still there, and the attraction is hotter than ever.   I loved every minute of Maddie and Jack together.

Jack came to the reunion looking for Maddie while Maddie was hoping to avoid Jack.   In true Holiday Springs Resort magic, these two come together and hash out their past, look to the future, and thoroughly enjoy the present.   I enjoyed that it was not easy for Maddie and Jack.   They had to have tough conversations, they both had to come to terms with their present and had to decide what they wanted for their future.   They were both adults, with jobs and commitments, but somehow, they managed to figure out what would be best for them.

Holiday Springs Resort is truly a magical place and I am loving this series that is set there.  I love that each book has new characters with their own stories to tell.  It does not matter if I have read other books in the series since the only common thread is the location.

To my surprise, Jack walked into the kitchen with a towel slung low on his hips and opened up the refrigerator. Leaning on the door, he peered inside. I was trying to keep my gaze on the documents in front of me, but I kept looking up to check out his ass in that towel. Part of me kept hoping it would accidentally fall off. Of course, now I found myself pissed off that, once again, I was having impure thoughts about Jack. I slammed my pen onto the table. “Why are you practically naked?” Slowly, he closed the refrigerator door and turned to address me. Damn. Maybe I should have kept quiet. All his sexy goodness was on display for me to see. For a millisecond, I faltered and nearly forgot why I was upset. “You’re not the only one here, you know. We have to share this place…” My tongue darted out and licked my suddenly dry bottom lip. Was his chest and six-pack abs glistening in the light coming from the window, or was I imagining things? Stop. “You can’t just walk around here half dressed. What if someone showed up?” “Are you expecting someone?” He wore an amused expression while he asked the question. I crossed my arms over my chest. “No… but that doesn’t matter. Put on a shirt.” Why was he so infuriating? “How would you like it if I pranced around here in my bra…” That had been the wrong thing to say. “Or panties… or nothing at all.” I lost steam when I realized the picture I was painting. Being pissed and horny clearly was a bad combination. I wasn’t thinking right. “I don’t see a problem.” He gave me a lecherous grin that exposed his teeth and revealed his want. “Just have some consideration and stop being selfish.” I hurled at him. That order quickly erased any goodwill he was feeling towards me. His look was thunderous. “I’m getting real tired of you making me out to be the bad guy here.” He gripped the back of one of the kitchen chairs until his knuckles turned white. “You’re asking me to have some consideration?” The incredulous scowl he wore caused his eyebrows to rise to his hairline. “You’re right, Maddie. We are sharing this house. You’d do well to remember that when you crank the heat up to freaking eighty degrees. How about that for consideration? Not all of us want to walk around in a sauna.” He threw his hands up. “It’s so damn hot in here, what am I supposed to wear? I’ll sweat to death. So unless you’re going to compromise on the temperature I’m going to wear whatever I damn well please around here, even if that means I walk around here naked.” I swallowed at the thought of him walking around the cabin naked. Other parts of my anatomy that I didn’t care to acknowledge quivered at the thought. Angrily, I stood. “Don’t threaten me. It always has to be your way.” Before I knew it, we were yelling over top of each other, trying to be heard. A few minutes later, Jack put his thumb and forefinger in his mouth and whistled, bringing the yelling match to its end. I was so agitated my breathing was erratic. Seconds passed, where we stood glowering at each other like two junkyard dogs that had squared off, but there wasn’t a victor. Jack’s shoulders slumped and the fight drained away in front of my eyes. He stared at me, but no longer was his look filled with outrage. “It’s been ten years, Maddie. You gonna stay mad at me forever?” His voice was weary, tired, and bordered on sad.

About Moni Moni Boyce is a writer, filmmaker, poet and Award-winning author of contemporary and paranormal romance. After working in the film industry for fifteen years, helping others bring their visions to life, she now creates characters and worlds of her own. She considers herself a bookworm, film buff, foodie, music lover and an avid world traveler having visited 33 countries and counting. She lives a bit of a nomadic life, but considers Los Angeles her hometown.

About the Holiday Springs Resort Series

Nestled deep in the mountains of Pennsylvania, Holiday Springs Resort promises to bring the heat this winter! Join Forever Write PR and seven amazing authors as they take to the slopes on the adventure of a lifetime and find their happily ever afters. From hot bartenders to brooding exes, Holiday Springs Resort is the place to be. Each story features a brand new couple and a fun trope to love from our amazing line up of authors including: second chance romance and best friend's sibling to jilted brides and friends to lovers. Your holiday wonderland won’t be complete without a widower, office, and enemies to lovers romance. We’ve got a remarkable line of up must-read romance authors including, A.M. Williams, Julie Archer, Kim Bailey, Moni Boyce, S.E. Rose, Stacey Lewis, and B. Ivy Woods. Follow the Holiday Spring Resort series on Facebook for more on release dates, cover reveals, and exclusive book news ➝ https://www.facebook.com/HolidaySpringsSeries/
This series and all promotional events are brought to you by Forever Write PR - Forever your source for all your writing needs. https://www.facebook.com/ForeverWritePR/
Posted by A Soccer Mom's Book Blog at 12:00 PM