REVIEW for Cherished by M.J. Masucci 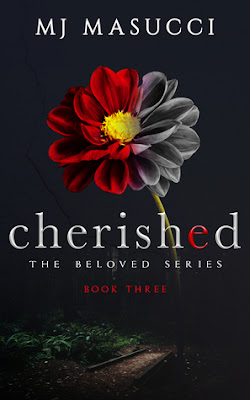 There’s a fine line between love and obsession.

It’s Julian’s turn to be kidnapped, leaving Nina to deal with her demons on her own. She can’t live in the home they were to share and she won’t give up trying to find him. But Julian’s captor is cunning and smart, moving him from place to place to avoid detection.

All Julian can think about is getting back to Nina. It’s what keeps him fighting even when he’s left in the dark, weakened by starvation and turned into a puppet for his captor’s amusement.

In a final cruel twist, devastating secrets from Julian’s past will be revealed.

If you like Robin Perini’s, Forgotten Secrets, you’ll love the Cherished.

Buy your copy of Cherished today and learn the horrible truth.

**This is the last book of The Beloved Trilogy, HEA

I love these characters and this story.   Julian has lost it all when he lost his family.  Nina is overprotected by her family.   With Nina, Julian finds a family that he didn’t realize how badly was needed and Nina finds someone who will respect her enough to make her own decisions and mistakes. Their story has progressed through the first two books and now with Cherished we finally get to know their ending.   It is a HEA ending!! (I’m not giving it away, the author shared that in the synopsis.)

The final book in a series should tie the story up with the perfect ending and this one does but I wanted more.    Maybe I was just so connected to the characters that I was being greedy and not wanting their story to end, maybe I had my own thoughts as to what would happen, or maybe I just wanted more…plain and simple.      I finished the last page, set the book down, and thought wow, that’s it?   I want to see how their life moved on, how they love each other until they were old; if they had children… there were so many things I wanted to know more about.  Yet, as a good author is known to do MJ left it to my imagination.

The Beloved series is wonderful.   The books do have to be read in order as each book starts where the one before it leaves off but they are easy to read.   Pick up this series, read these books, you will love them!


Purchase your copy at AMAZON
Posted by A Soccer Mom's Book Blog at 3:00 AM