My debut novel Reflected Destinies has been published now for just over a year.  It was such an amazing feeling when I first held a copy of my own book in my hands.  It was a dream come true for me, something I had dreamt off since I was a little girl.  My future ambition is to be able to turn my writing into a career and the only way I can do that is by writing more stories.

I’m very lucky that at the moment I have lots of ideas for stories for my women’s fiction novels, my children’s novels and also some future young adult books.

Later this year my second novel under the name of Florence Keeling is due for release.  Entitled Winters’ Gift, it follows the story of Bea Winters, an aspiring author from Birmingham.  She has a bizarre family, an unconventional childhood and is unhappy in her work.

Strange events unfold that lead her to re-locate to Yorkshire.  With her dream job in a publishing house and a sexy new boss she soon falls in love with the town of Bloomsdale and its residents.  But there’s one resident in particular that she keeps bumping into and secrets have a habit of revealing themselves.

The first in my children’s series entitled Josie James and The Teardrops of Summer was released in August.  It tells the story of 13 year old Josie who while staying at her Great Grandmother’s cottage for the summer finds herself swept into the hidden world of Suncroft.  The series is five books long with the second, Josie James and The Velvet Knife due for release in Spring 2019 and I am just starting to write the third one, Josie James and The Trial of Ages.

I have just finished writing the first in a new children series about a magic academy that runs alongside a traditional high school.

Future Florence Keeling stories I am looking forward to writing are Forever Not Yours, The Inglenook Café and A Cranberry for Christmas.

I have also part written a novel for young adults entitled The Jubilee Consortium.  It is a speculative fiction novel set in 2020 where a group of people learn to re-adjust to a whole new life after an epic event on New Year’s Eve.

My most challenging story that I have started is a trilogy called The Blood Tree Chronicles which is a post-apocalyptic novel with four different viewpoints.  I have only ever written with one main character so I am really looking forward to the challenge of this one.

New story ideas come to me all the time and just earlier today I had an idea for a Camelot re-telling with female knights and a female King Arthur. 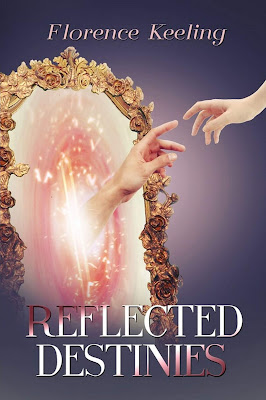 Laura is happy and content, she has a new boyfriend and loves her job teaching primary school pupils in London.  But when she inherits a rundown house from a stranger on her 30th birthday, memories of her prom night come flooding back, memories of a scary encounter and an antique mirror in the very same house.

Laura visits the house with all its secrets and as she unravels the clues she reveals the biggest secret of all: her own destiny.  But how can you change the future if it’s already written in the past?

About Florence Keeling
Florence Keeling adopted for her pen-name her Great Grandmother's name, chosen because of the shared birthday of April Fool's Day.  She is married with two teenage chidren.  Born and raised in Coventry, England she now lives just outside in Nuneaton.  Reflected Destinies is her first novel.

Florence Keeling also writes for children under the name of Lily Mae Walters.


Giveaway to Win a Signed copy of Reflected Destinies  (UK Only)

*Terms and Conditions –UK entries welcome.  Please enter using the Rafflecopter box below.  The winner will be selected at random via Rafflecopter from all valid entries and will be notified by Twitter and/or email. If no response is received within 7 days then I reserve the right to select an alternative winner. Open to all entrants aged 18 or over.  Any personal data given as part of the competition entry is used for this purpose only and will not be shared with third parties, with the exception of the winners’ information. This will passed to the giveaway organiser and used only for fulfilment of the prize, after which time I will delete the data.  I am not responsible for despatch or delivery of the prize. 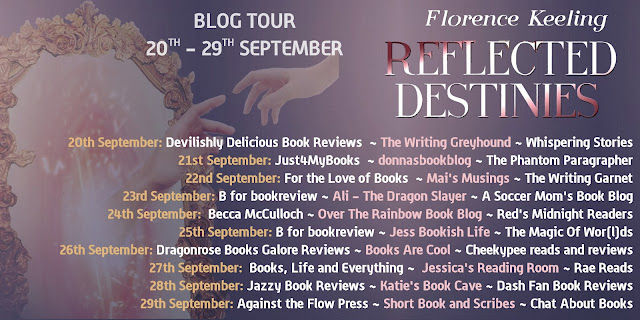