COVER REVEAL of The Stepsister by Jenny O'Brien 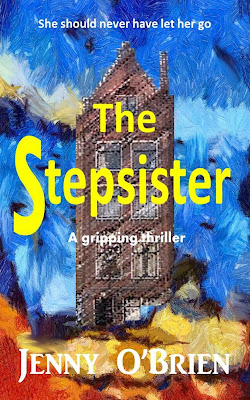 When a stranger leaves step-sisters, Victoria and Ness, a half-share in a house in Holland, they think it must be a mistake.

But there's no mistake when Ness goes missing.
Desperate for the truth, Victoria heads to Holland to find out what happened to her. Has she, as her texts show, embarked on a whirlwind romance? Has someone abducted her or even worse?

But there’s someone watching, and that person wants her dead.

Can Victoria find out the truth before it’s too late?

I died yesterday, or so I’ve been told.
Yesterday is the day my life changed but how or why is still a mystery. There are things I know and there are things that they’ve told me but I can’t seem to trust any of it.

I know I’m a woman but I don’t know my age. I know how to hold a cup in the same way I know it’s rude to stick the end of a knife in my mouth. So, somewhere along the way, someone cared enough to drill manners into me. Those are the things I know, the things I can trust but as for the rest…

They tell me I’m in Holland but can I believe them? I don’t remember if I’m Dutch but I also don’t remember if I’m not. I can’t speak Dutch. I’ve been trying all morning but can one lose a language overnight? I seem to have lost everything else. Who knows? Maybe I took the wrong train or something and just rolled up in the wrong city. That would make sense except that it’s not just my sense of place that’s missing. It’s my sense of everything. I have no name, no age and no identity. Yesterday I died and today I’m still here.

They’ve left me alone now while they try to puzzle out what to do and in the meantime I’m going to try to remember stuff. I don’t know how long they’ll leave me alone but I need to take this opportunity to come up with some answers to all the questions they’ve been throwing at me like who the hell I am.

Slipping out of bed I recoil as bare feet meets cold tiles, but that’s not going to stop me. Pulling the back of the hospital gown closed in an effort to retain some degree of dignity, I shuffle over to the bathroom and then the mirror only to stare into the face of a stranger.

My body holds a clue though - just one.

I push up my sleeve again to stare at the tattoo on my arm. The tattoo puzzles me. It’s not me, or part of me or who I think I am and yet it’s there, a large indelible letter V.

I have no idea what it stands for. Oh, I’m not stupid or anything or, at least I don’t think I am. I can’t quote which exams I’ve passed or if indeed I’ve ever attended school but I do know V stands for victory. But what does it mean to me? Am I victorious? Am I making a statement about something? It must be important because it’s the only tattoo I have. It’s also the only clue.
I’m tired now. My eyelids collapse over my eyes even as I struggle to shift them upwards as I remember the cocktail the nurse told me to swallow like a good girl. I want everything to go away. I want to hide under the blankets and forget. I’ve already forgotten… 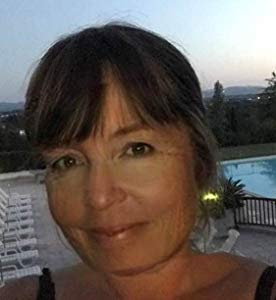 Jenny O'Brien was born in Ireland and, after a brief sojourn in Wales, now resides in Guernsey.
She's an avid reader and book reviewer for NetGalley in addition to being a RoNA judge.

She writes for both children and adults with a new book coming out every six months or so. She's also an avid collector of cats, broken laptops, dust and happy
endings - two of which you'll always find in her books.

In her spare time she can be found frowning at her wonky cakes and even wonkier breads. You'll be pleased to note she won't be entering Bake-Off.

Readers can find out more about Jenny from her blog: https://jennyobrienwriter.wordpress.com


Twitter: https://twitter.com/ScribblerJB
Posted by A Soccer Mom's Book Blog at 10:00 AM