REVIEW...Everything She Lost by Alessandra Harris 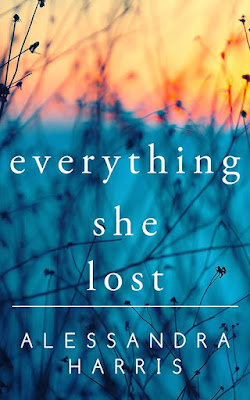 After suffering a mental breakdown that nearly destroyed her marriage, Nina Taylor works hard to maintain her tenuous hold on sanity and be a good mother to her two young daughters. Despite her best efforts, she questions the possibility of a full recovery.

Single mom Deja Johnson struggles to overcome her troubled past and raise her young son. But her friendship with Nina brings more complications. What Deja is hiding could not only destroy relationships, but endanger lives.

One traumatic night threatens to shatter Nina’s mind. With Deja’s help, she strives to maintain her mental balance. But as events spiral out of control, the women must find out if Nina is losing her sanity or if someone is plotting against her.

Everything She Lost is a psychological thriller.     Nina is fighting a mental illness.     She had a breakdown, has followed the treatment plan, and is doing better.   Until someone starts messing with her causing her to believe she is breaking down again.

I saw where this was going; I could see where the story was headed.   For me there was no surprise as to who was messing with her yet the knowing did not stop me from enjoying the story.     Alessandra Harris wrote a story that kept me turning pages, reading chapter after chapter even when I could hardly keep my eyes open.

Both Nina and Deja, the best friend, are strong women.  I really enjoyed how they were portrayed.    They both had histories that haunted them, families that were not available to them, and still held onto their lives working for a future they both wanted.

I’d recommend this to anyone who likes strong female characters and a psychological thriller in one great book.

Alessandra Harris doesn't shy away from controversial topics, and writes novels that reflect the diversity of her world. She loves stories that break your heart but leave you smiling at the end, so that’s exactly what she writes: made-up stories about almost-real people.

She lives in Silicon Valley with her husband and four children, and is the organizer of San Jose Novel Writers, a group of eclectic writers offering fellowship, support and tips on all forms of writing.

Alessandra's debut novel, Blaming the Wind, was published by Red Adept Publishing in 2016, followed by Everything She Lost in 2018.