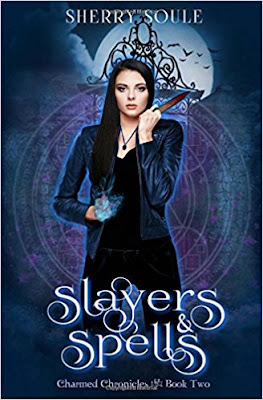 Something wicked and deadly is brewing in the haunted seaside town of Ravenwood...And only demon butt-kicking, extra girl-powery, and magick-slinging Shiloh Trudell can stop all the wrathy badness. Now that she's been tasked with protecting the sacred Charmed Chronicles, she's being hunted by the deadliest spawns of Hell. Even though fighting the forces of darkness might be her sacred duty, for Shiloh, it feels more like a suck-tastic curse. With vampires skulking in Ravenwood, Shiloh's not only battling the undead, but also her extreme attraction to the muscular and hunky, Trent Donovan, and the smoking hot yet mysterious Raze. Except, she has bigger issues to deal with than cute boys, like restraining the demony essence that's infecting her magick, and stopping an ancient evil from starting the apocalypse.Despite all the demonic drama ranking high on the witch-o-meter, they pale in comparison to the shocking truths Shiloh will uncover in Craven Manor. Dark secrets that could shatter her world...or possibly end it.But will Shiloh be strong enough to slay a multitude of immortal foes and save the world?

You never know what to expect from a book two in a series, but this one grabbed you from the very first page and never let you go.

Slayers and Spells picks up right where Witchy Wickedness ended.   Sherry Soule had me feeling as if I was right in the book with Shiloh, living the life she is stuck with.    I love that there is a triangle between Raze, Trent, and Shiloh.   I am definitely #TEAMRAZE but I think both Trent and Raze have many secrets that they are not sharing with Shiloh.

In the first book, the reader realized how bad Shiloh’s parents are, especially her mother, Darrah.    In this book you get a better understanding with why Darrah is as she is.   I am not giving her a pass, she is still a mother and every child, especially a teenager, needs her mother, but it did give me an understanding where I could go Oh, Yeah, I see.    Darrah still have not gotten what she deserves, in my opinion.

Thank you Sherry Soule for a copy of the book in exchange for an honest review.

Purchase your copy at AMAZON
Posted by A Soccer Mom's Book Blog at 3:00 AM