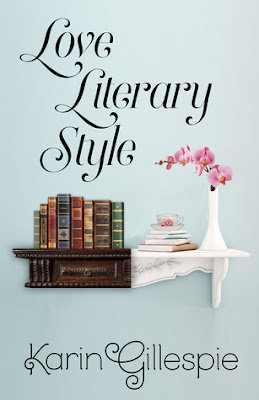 Low brow meets high brow in a literary love story. Can an emotionally-stunted literary novelist and a vivacious romance writer find their happily-ever after? Even when she becomes more successful than he? Love Literary Style spoofs romantic comedy tropes, winks at literary pretensions and pokes fun at book publishing. Like Legally Blonde only in the literary world. Inspired by the author's New York Times article "Masters in Chick Lit." A sparkling romantic comedy for fans of the Rosie Project.

There is so much I want to share about Love Literary Style but I don’t want to give it all away.     The character of Laurie Lee is mistaken for someone else by Aaron Mite at a writers’ colony.    I was amused by the start of their friendship/relationship.   Laurie was looking for a hook-up, which isn’t her style at all.  I laughed at the tactics Laurie went to just to get Aaron’s attention.    Aaron’s outright ignoring her was just as funny.    When they got together I expected a geeky awkwardness that just wasn’t there, at least not all the time.

Aaron is not a character that I liked all the time.   I felt like he was too smart.   There were times that he couldn’t relate to what Laurie was going through and I wanted her to tell him to take a walk.   Yet, together they made sense.   Laurie made him be more human.   She forced him to do things that were foreign to him yet things other people did daily.     In Aaron’s defense, he also forced Laurie to make herself a better writer, calling her out on the places where her writing was lacking although a lot more tact would have been nice.

This is a humorous, fun book.   Love Literary Style is the first book by Karen Gillespie that I have read and I look forward to reading more.