All Darling Children by Katrina Monroe 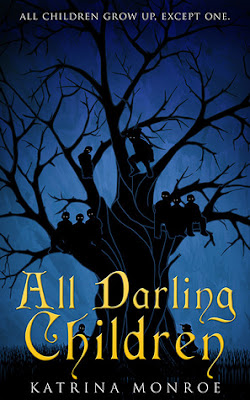 All boys grow up, except one.

On the tenth anniversary of her mother's death, fourteen-year-old Madge Darling’s grandmother suffers a heart attack. With the overbearing Grandma Wendy in the hospital, Madge runs away to Chicago, intent on tracking down a woman she believes is actually her mother.

On her way to the Windy City, a boy named Peter Pan lures Madge to Neverland, a magical place where children can remain young forever. While Pan plays puppet master in a twisted game only he understands, Madge discovers the disturbing price of Peter Pan's eternal youth.

I am a sucker for a good fairy tale twist.   All Darling Children is a new one for me.  This is the first Peter Pan twist that I have read.     I love that the characters were familiar, Peter Pan, Captain Hook, Smee,  The Lost Boys, and Wendy.   Add to that list some new characters with Jane and Madge and the story takes on new life.

The story of Peter Pan is a fairytale to most people.     In this story you see a different side of Pan and an entirely different Hook.    The Darling children from Wendy, her daughter Jane, and finally her granddaughter Madge all travel to Neverland and realize what Peter Pan really is.   The fact that Wendy returns to the real world and becomes a scorned old woman really changes my perception of her.     I felt for Madge, stuck growing up with a woman like Wendy has become.

All Darling Children is a dark tale.   It is not bells and whistles, fun and fairies.   Katrina Monroe takes a happy Neverland and melds it into a dark, scary Neverland.    I really enjoyed this twisted fairytale.   Pick up a copy ASAP.