The Secret Language of Stones by M.J. Rose

As World War I rages and the Romanov dynasty reaches its sudden, brutal end, a young jewelry maker discovers love, passion, and her own healing powers in this rich and romantic ghost story, the perfect follow-up to M.J. Rose’s “brilliantly crafted” (Providence Journal) novel The Witch of Painted Sorrows.

Set in Paris at the height of World War I, New York Times bestselling author M.J. ROSE’s THE SECRET LANGUAGE OF STONES (Atria Books, On Sale July 19, 2016; $25.00) follows the dangerous and sensual journey of Opaline Duplessi, who has the power to communicate with the dead. 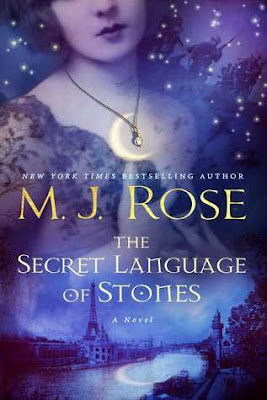 Nestled within Paris’ historic Palais Royal is a jewelry store unlike any other. La Fantasie Russie is owned by Pavel Orloff, protégé to the famous Faberge, and is known by the city’s fashion elite as the place to find the rarest of gemstones and the most unique designs. But war has transformed Paris from a city of style and romance to a place of fear and mourning. In the summer of 1918, places where lovers used to walk, widows now wander alone.

So it is from La Fantasie Russie’s workshop that Opaline Duplessi now spends her time making trench watches for soldiers at the front, as well as mourning jewelry for the mothers, wives, and lovers of those who have fallen. People say that Opaline’s creations are magical. But magic is a word Opaline would rather not use. The concept is too closely associated with her mother Sandrine, who practices the dark arts passed down from their ancestor La Lune, one of sixteenth century Paris’ most famous courtesans.

Opaline does have a rare gift even she can’t deny.  It’s a form of lithomancy that allows her to translate the energy emanating from stones. Certain gemstones, combined with a personal item, such as a lock of hair, enable her to receive messages from beyond the grave. In her mind, she is no mystic, but merely a messenger, giving voice to soldiers who died before they were able to properly express themselves to loved ones. Until one day, one of these fallen soldiers communicates a message—directly to her.

So begins a dangerous journey that will take Opaline into the darkest corners of wartime Paris and across the English Channel, where the exiled Romanov dowager empress is waiting to discover the fate of her family. Full of romance, seduction, and a love so powerful it reaches beyond the grave, THE SECRETLANGUAGE OF STONES is yet another “spellbindingly haunting” (Suspense Magazine), “entrancing read that will long be savored” (Library Journal, starred review).

I read book one in this series, The Wiches of Painted Sorrow (CHECK OUT MY REVIEW HERE) , and felt the same way about it as I do about The Secret Language of Stones.    It starts slow but is full of history and background that is necessary to truly understand and appreciate the story.   The picture that M.J. Rose portrays of Paris during the time of war and how the people are affected is amazing and vivid.    I could hear the raid sirens and picture the underground areas where they took cover.     I could picture the jewelry store that Opaline works in and the people that she worked with.

This story has a ghost twist that I loved!    I loved seeing Opaline interact with the different ghosts and help the wives and mothers of soldiers lost to war.    This is a great part of the story with so much heart and sorrow.     I loved that there was only one ghost… one love…

The Secret Language of Stones is a sequel to The Witches of Painted Sorrow yet this book could be read without reading the first one.   As with most series they are better read in order but each could be read in any order.   Either way I recommend picking up both books and reading them.

M.J. ROSE grew up in New York City mostly in the labyrinthine galleries of the Metropolitan Museum, the dark tunnels and lush gardens of Central Park and reading her mother's favorite books before she was allowed. She is the author of more than a dozen novels, the co-president and founding board member ofInternational Thriller Writers, and the founder of the first marketing company for authors: AuthorBuzz.com. She lives in Greenwich, Connecticut.

THE SECRET LANGUAGE OF STONES is the second novel in a stunning new trilogy from M.J. that showcases her extraordinary gifts as a first-rate historical novelist and an expert on the visual arts and the occult. In Book One, The Witch of Painted Sorrows, we met Sandrine Salome, a woman seduced by themany pleasures to be found in Belle Epoque Paris; her gift for painting allowed her entry into the Ecole des Beaux-Arts (forbidden to women at the time) and a mentor in Gustave Moreau.

BELOVED BY BOOKSELLERS, READERS, AND CRITICS ALIKE:  The Witch of Painted Sorrows was Rose’s 7th Indie Next pick in a row and a Library Reads pick. It received a starred review from Library Journal, as well as prime coverage in People, the Associated Press, Huffington Post, Providence Journal, Suspense Magazine, and the Boston Globe. Anne Rice called M.J. an "elegant writer with fine style."