The Girl Who Stayed by Tanya Anne Crosby

About The Girl Who Stayed 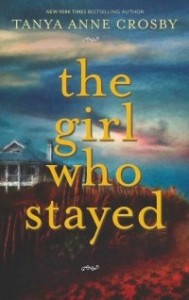 Zoe Rutherford wasn't sure what she was expecting when she returned to Sullivan's Island. The house on Sullivan's hadn't represented home to her in decades. It was the place where she endured her father's cruelty. It was the place where her mother closed herself off from the world. It was the place where her sister disappeared. But now that her parents are gone, Zoe needs to return to the house, to close it down and prepare it for sale. She intends to get this done as quickly as possible and get on with her life, even though that life seems clouded by her past, both distant and recent. But what she discovers when she gets there is far beyond her imagining and will change her in profound ways. The Girl Who Stayed is a remarkable exploration of the soul by a writer with a rare talent for reaching into the hearts of her characters and her readers, a novel of transformation that will leave you moved and breathless.

The Girl Who Stayed is a tough book.    The loss of a family member is always tough much less when a young sister loses a younger sister and there is no closure.    The fact that Hannah, Zoe’s sister, disappears and is never seen again when she is so young had to tear their family apart.   Zoe runs from it.   She feels herself responsible somehow.

Zoe was not an easy to relate to character.      I had a hard time with most of the characters.   There were times that a character came in, left, and then came back chapters later and I wasn’t always sure how they fit into the story.   Ethan, Zoe’s island handy man, was one of those characters.    I wasn’t sure what I wanted to happen between them or what the author had in mind for them.     The sheriff was another of those characters.   He didn’t really have a part in the story, yet he was there.

While all this may seem like I didn’t enjoy the book, I did.   I actually stayed home from dinner so that I could keep reading I was that pulled into it.      The story was interesting and kept me guessing.   I was not sure where it was heading, who was guilty, and if Zoe would be okay.     The Girl Who Stayed was not an easy book.   No way was it a quick read but it was a good read.   I recommend checking it out.

Tanya Anne Crosby is the New York Times and USA Today bestselling author of twenty-five novels. She has been featured in magazines, such as People, Romantic Times and Publisher's Weekly, and her books have been translated into eight languages. Her first novel was published in 1992 by Avon Books, where Tanya was hailed as "one of Avon's fastest rising stars." Her fourth book was chosen to launch the company's Avon Romantic Treasure imprint. Known for stories charged with emotion and humor and filled with flawed characters, Tanya is an award-winning author, journalist, and editor, and her novels have garnered reader praise and glowing critical reviews. In 2013, she penned her first romantic suspense novel, Speak No Evil, which appeared on the USA Today list. The Girl Who Stayed brings her full circle to work with Lou Aronica, President and Publisher of The Story Plant, who first published Tanya at Avon Books. Tanya and her writer husband split their time between Charleston, SC, where she was raised, and northern Michigan, where the couple make their home. Find out more about Tanya at her website and on her blog, and connect with her on Facebook and Twitter.
Posted by A Soccer Mom's Book Blog at 5:00 AM