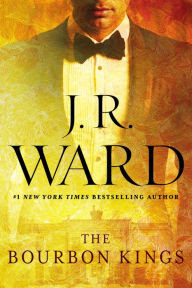 For generations, the Bradford family has worn the mantle of kings of the bourbon capital of the world. Their sustained wealth has afforded them prestige and privilege—as well as a hard-won division of class on their sprawling estate, Easterly. Upstairs, a dynasty that by all appearances plays by the rules of good fortune and good taste. Downstairs, the staff who work tirelessly to maintain the impeccable Bradford facade. And never the twain shall meet.

For Lizzie King, Easterly’s head gardener, crossing that divide nearly ruined her life. Falling in love with Tulane, the prodigal son of the bourbon dynasty, was nothing that she intended or wanted—and their bitter breakup only served to prove her instincts were right. Now, after two years of staying away, Tulane is finally coming home again, and he is bringing the past with him. No one will be left unmarked: not Tulane’s beautiful and ruthless wife; not his older brother, whose bitterness and bad blood know no bounds; and especially not the ironfisted Bradford patriarch, a man with few morals, fewer scruples, and many, many terrible secrets.

As family tensions—professional and intimately private—ignite, Easterly and all its inhabitants are thrown into the grips of an irrevocable transformation, and only the cunning will survive.

There is a lot going on in The Bourbon Kings.    The Bradford family is a complex yet super loyal group.   The four siblings along with their wives/girlfriends, their mother and father, and the rest of the staff all Lizzie, the hired help, and Lane, the middle Bradford son.   The twists and turns in their relationship are intense and sometimes rather strange.    The heat between the two of them is steamy and nothing seems to be able to put that fire out.   Yet, Lizzie is only the hired help and Lane is married.   It seems everything is working against the two of them.

The side story of Edward was what really got my attention.   I wanted to help him.   I hated the grief, fear, and self hate that he lives with everyday of his life.    The fact that he knows his father hates him, enough to want to kill him, and that now he has deformities that make him not attractive (in his eyes) to others makes me sad for him.   I was to know more about this person.   I need him to find himself again, to find his happiness, and to step up and take part of the family legacy.

There is also Virginia, self centered daughter, and Max, who the reader doesn’t learn a lot about.   I suspect that we will learn more about these characters in the upcoming books in this series.

While J.R. Ward is an established author, this is a different type of story line for her.   I loved it.   This was a book that as I was getting to the end of the story I slowed my reading down.  I did not want it to end.   I wanted to know more about the characters.    This is another great series.    Do not wait, go get your copy today.