The Best of Enemies by Jen Lancaster 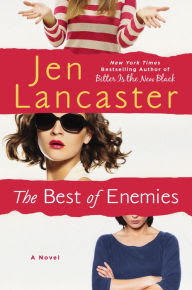 Jacqueline Jordan knows conflict. A fearless journalist, she’s spent the past decade embedded in the world’s hot spots, writing about the fall of nations and the rise of despots. But if you were to inquire about who topped Jack’s enemy list, she’d not hesitate to answer: Kitty Carricoe.

Kitty reigns supreme over the world of carpools and minivans. A SAHM, she spends her days caring for her dentist husband and three towheaded children, running the PTA, and hiding vegetables in deceptively delicious packed lunches.

Kitty and Jack haven’t a single thing in common—except for Sarabeth Chandler, their mutual bestie. Sarabeth and Jack can be tomboys with the best of them, while Sarabeth can get her girly-girl on with Kitty. In fact, the three of them were college friends until the notorious frat party incident, when Jack accidentally hooked up with Kitty’s boyfriend…

Yet both women drop everything and rush to Sarabeth’s side when they get the call that her fabulously wealthy husband has perished in a suspicious boating accident. To solve the mystery surrounding his death, Jack and Kitty must bury the hatchet and hit the road for a trip that just may bring them together—if it doesn’t kill them first.

If you have not read Jen Lancaster’s books before you are seriously missing out.    The Best of Enemies is a little different than some of her other books but it is just as good.    I found this book to be just as quirky and fun but it had a mystery in it.   Honestly, I had the mystery solved before the end but I was still thrilled with the ending.    Just remember all is not as it seems.

The characters were all interesting.   Jack (Jacqueline) is, of course, my favorite.    I love that she is such a tomboy and knew it.    She loved being one of the boys, although she becomes one of the boys almost by default of not having her mom around.      Kitty was the wicked one of the book.  I felt like she was always out to take someone for something.    She felt she was very important and deserved more than she received.   Don’t get me wrong, I liked her.   Even the bad girl isn’t always bad.    Finally, there is Sars (Betsy).   She is the best friend to both Kitty and Jack.    She is awkward in her youth and extremely successful when an adult.    I felt that each character was developed well and had their own story line that was well written.

The storyline was interesting.   When I started the book I was so confused.  I didn’t really understand all the invites and the bills that followed for the destruction.   I will admit that I giggled at the chocolate fountain incident.    It took me a few chapters in to really understand what was going on.    I enjoyed that the chapters alternated between Jack’s point of view and Kitty’s point of view.  I always find it interesting to see how two people who are experiencing the same thing can have such different opinions and views on how things happen.

I definitely recommend checking out The Best of Enemies.   Jen Lancaster is an author that is on my must read list.