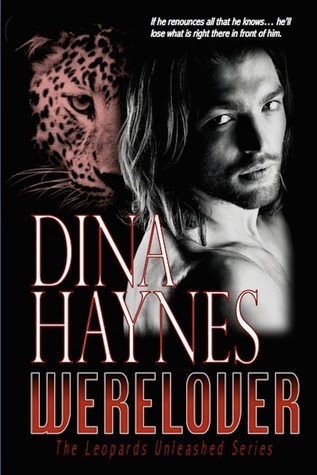 Doug has tried to distance himself from a female who killed an innocent to keep him from leaving. Years later, he is still trapped and her threats have riddled his mind with self-hate. Now, he seeks the forbidden comforts of a human again. The attraction is swift and as his heart latches on, he hopes that in due time she’ll accept him, wereleopard spots and all.
When his brother comes to town, he offers Doug a plan that will shift his life for the better. As Doug starts to gain power and embody the male his father always wanted him to be, the truth rears its ugly head…

A human won’t fit into the picture.

But she doesn’t know the whole story yet.

Doug refuses to walk away from her and his truth won’t stay hidden. When Eve finally comes face-to-face with it, neither will hers.

Oh how I have loved this series.    These are not just wereleopards, they are people with real lives and real feelings.   I feel like they are friends and people I am invested in.    They deserve the happiness that they all want and I want to share in that happiness with them.

Doug had been living in his own hell for so long that I am not sure that he even knows that life was like before Miranda.     He wants to break away and find a life.   A life without punishment and someone checking on his every move.     I felt for Doug.   He needed to move past Miranda, but how?    I had no idea where this story was going, but  LOVED every word of it.    When Doug met Eve I felt the sparks, I loved the romance, and I loved that they both were cautious.   While jumping right into a relationship and bed is great, Doug and Eve both had secrets and knew they had to deal with it.

Dina Haynes knew exactly what the readers want and knew exactly how to write it.    This is the perfect series.   If you are someone looking for a paranormal romance story look no further.

***Check out my reviews of the first two books of the series from my early posts. ***
Posted by A Soccer Mom's Book Blog at 5:00 AM