Before I Fall by Jessica Scott 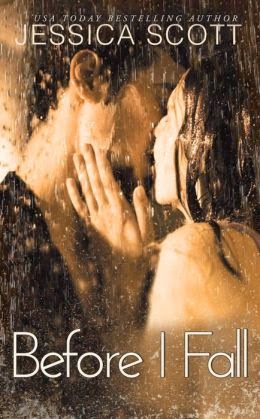 Stay focused. Get a job. Save her father's life.

Beth Lamont knows far too much about the harsh realities of life her gilded classmates have only read about in class. She'll do whatever it takes to take care of her father, even if that means tutoring a guy like Noah - a guy who represents everything she hates about the war, soldiers and what the Army has done to her family.

Noah Warren doesn't know how to be a student. All he knows is war. But he's going to college now to fulfill a promise and he doesn't break his promises. Except he doesn't count on his tutor being drop dead gorgeous and distracting as hell. One look at Beth threatens to unravel the careful lies Noah has constructed around him.

Jessica Scott is an author that I have enjoyed many times.    She takes the reality of war and the life after and turns them into stories that enlighten her readers, giving them insights to what the military life entails.  Before I Fall is the perfect example of this.

This story is more Young Adult than some of her others.   While her other books have dealt more with  adult characters, Before I Fall is the story of two young adults.   Both Beth and Noah are dealing with the after effects of military life, although in different ways.   They are both victims of circumstances beyond their control.

Beth, due to father, has had to grow up quickly and deal with things that most people would fold under the pressure of.    The strength that she shows while dealing with the VA, college, work, and Noah is enough to push anyone over the edge.   Yet, she manages to hold strong and learn so much about herself and the love of others.   While dealing with all of this, she manages to find herself and find out what she really deserves out of life.

Noah, home from war, is dealing with his own demons.   He knows that he does not have it all under control.   He tries to be strong to support Beth with her life, yet knows that he is just covering his truth. The support that he has from his professor, Beth, and his military friends is amazing.   Without that support he would not be able to function without that.

Jessica Scott has done it again.   The love, the characters, and the story are all exactly what I have come to expect from Jessica.   This is a story that is real.   It is the story of the life of many military families after they have served their time.    It is eye opening, heart wrenching, and amazing.   I definitely recommend everyone to check out all of Jessica’s book, including Before I Fall.