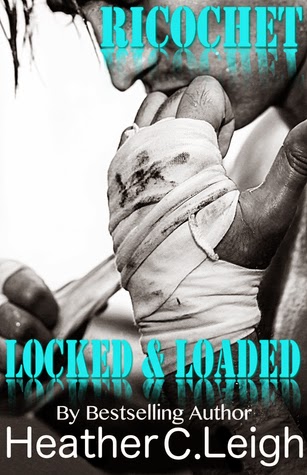 Sigh… I have fallen for Rick “Ricochet”.  A tough marine, a tough fighter, a man with manners, and a huge heart.   He hides his heart, I am not actually even sure he believes he deserves to love, yet when he met Quinn it was obvious that his heart was aching to get out.    Rick is a man, an alpha male, and amazing.    Yet, one look or word from Quinn and he falls apart.    He wants nothing more than to protect her.    He is patient with Quinn’s past and not pressuring her to tell him.

Quinn, what a strong woman.   I am not sure that I could go through what she did with Travis, her husband, and be able to work at a fight club with big males.   She is timid, most of the time.  The time she showed that she wasn’t timid was my favorite scene of the book.

With the way this story ended, I am hoping for more of their story very soon.   Heather C. Leigh needs to keep writing about these two characters.  I would also love to know more about the other fighters in this story.   This is a great novella that I certainly recommend.


Check out the next two parts of this series on April 1st and April 3rd.