How Much Do You Love Me? By Paul Mark Tag & GIVEAWAY 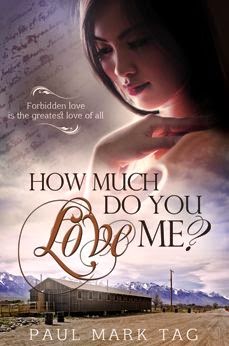 It's December 1941, and the Japanese have bombed Pearl Harbor. Politicians fuel anti-Japanese hysteria and campaign to segregate Japanese Americans. During this period of hate and racial frenzy, Keiko and James, a Japanese American and a Caucasian, fall inlove and marry. Before long, James goes off to war and Keiko to an internment camp.

Sixty years later, Keiko has a stroke and lies near death, while James suffers from Alzheimer's. Coincidentally, a chance incident makes their daughter, Kazuko, born in the camps, suspect a family secret. Fighting the clock before her mother's death, she races to unravel the mystery. What she uncovers represents nothing short of the epitome of human love and self-sacrifice.

This is the first book I have read that included the Japanese internment camps, as a matter of fact I didn’t even realize that this had happen during WW II.   I can actually understand why it is not a part of history that the US should be proud of or even discuss often.  Just the fact that the Japanese, whether US citizens or not, had to leave their homes just in case they were spies broke my heart.   Although, seeing how Keiko and her family handled it and how they were able to build their family ties tighter it ended up being not all bad.   I am not saying that it was okay they were sent there, more that some good did come from it.

But now on to the book, absolutely amazing.   Going between 1942-1942 and 2000 could be tricky, but Paul Mark Tag did it perfectly.   Instead of having two separate stories that sometimes intertwined, this is one story that is told exactly how it needed to be.  The flashbacks gave history that needed to be shared and told, while the present is searching for clues of what the secret is.  While the secret was kept until the end of the story, I can honestly say I had no clue what it was going to be.  I had theories, but none ended up being what happen.

I have to recommend this book.  World War II fans, mystery fans, and historical fictions readers will all love this story.