Review for In Royal Service to the Queen by Tessa Arlen

In Royal Service to the Queen: A Novel of the Queen's Governess by  Tessa Arlen 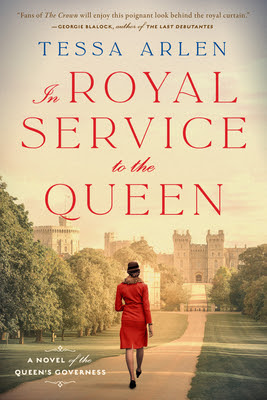 From Goodreads...The revealing story of Queen Elizabeth II's beloved governess, Marion Crawford, who spent more than sixteen years of her life in loyal service to the royal family and was later shunned by those she has loved and served.

Marion Crawford can remember each of the wonderful years when she was governess to the little Princesses Elizabeth and Margaret Rose: included in their lives, confided in, needed, trusted, and loved. These memories will never dim, ever. In Marion's mind, she will always be their Crawfie.

But things become increasingly complicated as the young royals navigate adulthood. It is May 1945 and Princess Elizabeth--the heiress presumptive to the British throne--has fallen in love, and the only member of her family who is happy for her is her governess. No one in the young princess's life thinks that Prince Philip of Greece would be a suitable husband for the future Queen of England. No one that is, except for Marion Crawford.

Crawfie wholeheartedly supports Elizabeth in her determination to marry Philip. She too has fallen in love--and has convinced her fiancé, George, that they must wait for Elizabeth and Philip to receive the King's blessing before she can leave her service to the Crown.

Over the next two years Crawfie is caught between loyalty to Princess Elizabeth; running the risk of alienating her royal employer, Queen Elizabeth; and losing the man she loves. But as Crawfie prevails to marry George and stands with him in Westminster Abbey on Elizabeth and Philip's wedding day, she is unaware that her troubled relationship with Queen Elizabeth is far from over. And just around the corner is a betrayal that will sever her bond with the royal family forever.

My Thoughts…I am a historical fiction junkie.   I read almost everything historical that I can get my hands on so when I heard about Marion Crawford I was intrigued.  I have read much about the Queen but did not know anything about the governess.  I knew that this was a book that I had to read.

I loved how much she loved Elizabeth and Margaret.   She was hired as a tutor but became so much more.   She let them be children while also teaching them.   She gave them normal experiences but also realized that they were not living normal lives. They had to be protected but also taught.   She listened to them and gave them the best advice she could.  I was amazed at how much of her life she had to give up to do her job.   She did not see her mother regularly, she struggled to have a relationship with her fiancé, and when she married, she had to continue working away from her husband.

When she choses to tell the princesses story she does not know how the royals will react.   With their reaction she is shocked and heartbroken but knows that she did not do anything wrong.   The Queen was able to edit what she wrote and still “allowed” it to be released.   I enjoyed seeing Marion come into her own and stand up for herself.   Her life was not easy, but she found a way to get the happy ever after that she deserved.

**Thank you Natalie Sellers at Penguin Random House for a copy of the book via NetGalley in exchange for an honest review.

Meet Tessa Arlen…When Tessa was asked why she chose to write historical fiction she admitted that history was the only subject in her English boarding school, apart from literature, that held any genuine interest or that she was particularly good at. She admits that she was a terrible student: a real day-dreamer!

Her father was a career diplomat which meant the family lived everywhere—until Tessa was nine and sent back to England for a ‘proper’ education. The contrast between her boarding school at the top of a windy hill in the Chilterns with its drafty dormitories and frightful food was a stark one compared to her earlier life in the vivid warmth of the tropics. She was in such culture shock she simply disappeared into her own world for four years; rescued from complete academic disaster by her history teacher, Elfreda, Lady Neale. Tessa recalls that Lady Neale was a strange old lady: “She was tall and rather stooped with straight iron-gray hair. She spoke in such a low tone we had difficulty hearing her, and would crane forward in our seats. She certainly made those ancient centuries live for us! She was very fond of telling us that history was simply ‘very old gossip.'” Tessa has been a fascinated amateur historian ever since.