America is at a crossroads. Can we find a common ground?
An eclectic anthology of passionate letters to America during a time when politics and perspectives collide


“Action is the antidote to despair.”  - Joan Baez 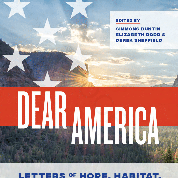 Since the 2106 presidential election, America has been barrelling headfirst toward a crossroads. Conflicting political and social perspectives reflect a need to collectively define our moral imperatives, clarify cultural values, and inspire meaningful change. In that patriotic spirit, hundreds of writers, poets, artists, scientists, and political and community leaders have come together sharing their impassioned letters to America in a project envisioned and published by the online journal Terrain.org—the “Letters to America” series.

More than 130 works, all calls to action for common ground and conflict resolution with a focus on the environment and social justice, are collected in Dear America. Taken as a whole, the work is a diverse clarion call of literary reactions to the nation’s challenges as we approach future political elections (especially the one coming this November).

“The voices in this essential anthology are anything but silent. Indeed, they are voices of hope, habitat, defiance, and, most importantly, democracy. Lend your ears, and then your own voice.” — Simmons Buntin, editor


●     How it got started: The Dear America brings Americans together from across the country and all walks of life
●     2020 Presidential election: how the outcome will affect our country from multiple points of view
●     Climate Change - Hear from members of the Union of Concerned Scientists
●     Excerpts/Interviews with diverse writers from the fields of science, politics, social justice, education, art, and the literary community are available for interview and their work available for excerpt - including:
○     Contributor Pete Sousa, best-selling author and official photographer for the Obama and Reagan administrations
○     Contributor Bob Ferguson, who holds the most successful legal record in the country against Trump
○     Letters/poetry from contributors: Pulitzer Prize winner Elizabeth Rush, National Book Award winner Arthur Sze, and finalist Jericho Brown

Dear America encourages readers to come to a common resolution about the environment and social injustice going on in America through words of literature and art.

Terrain.org is a nonprofit literary magazine published online since 1997 that searches for the interface—the integration—among the built and natural environments that might be called the soul of place. The works published by Terrain.org ultimately examine the physical realm around us, and how those environments influence us and each other physically, mentally, emotionally, and spiritually. 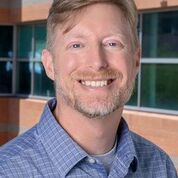 Simmons Buntin, is editor-in-chief of Terrain.org He has authored 2 books of poetry, Riverfall,and  Bloom, and also Unsprawl: Remixing Spaces as Places (co-authored with Ken Pirie). He has published poetry, essays, and technical articles in publications as varied as Edible Baja Arizona, North American Review, Kyoto Journal, and Bulletin of Science, Technology, and Society. He has a master’s degree in urban and regional planning from the University of Colorado, Denver, and an MFA in creative writing from the University of Arizona. Simmons lives in Tucson, Arizona. 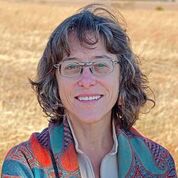 Elizabeth Dodd is a poet and nonfiction writer. Her newest book, Horizon’s Lens: My Time on the Turning World, was published by the University of Nebraska Press in 2012. For over two decades she has lived in eastern Kansas in the Flint Hills region, where she is an award-winning professor of creative writing and literature at Kansas State University. 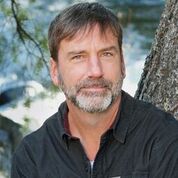 Derek Sheffield has presented widely at conferences around the West on the interaction between science and poetry. His own work often explores this topic and has appeared in Orion, Wilderness, Poetry, The Georgia Review, The Southern Review, Ecotone, Alaska Quarterly Review, and Southern Humanities Review, and several anthologies, including New Poets of the American West, The Ecopoetry Anthology, Nature and Environmental Writing: A Guide and Anthology, and The World Is Charged: Poetic Engagements with Gerard Manley Hopkins. Since 2003, he has been a professor of English at Wenatchee Valley College in central Washington.