Paperback Available for Who Slays the Wicked by C.S. Harris

In April 2019 I reviewed Who Slays the Wicked by C.S. Harris.   Today we are celebrating that the book is now available in paperback. 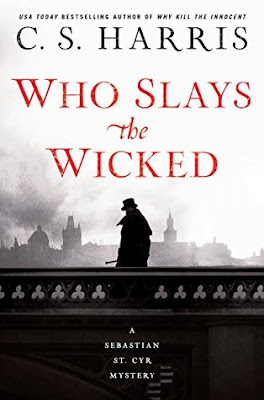 The death of a fiendish nobleman strikes close to home as Sebastian St. Cyr is tasked with finding the killer to save his young cousin from persecution in this riveting new historical mystery from the USA Today bestselling author of Why Kill the Innocent....

When the handsome but dissolute young gentleman Lord Ashworth is found brutally murdered, Sebastian St. Cyr, Viscount Devlin, is called in by Bow Street magistrate Sir Henry Lovejoy to help catch the killer. Just seven months before, Sebastian had suspected Ashworth of aiding one of his longtime friends and companions in the kidnapping and murder of a string of vulnerable street children. But Sebastian was never able to prove Ashworth's complicity. Nor was he able to prevent his troubled, headstrong young niece Stephanie from entering into a disastrous marriage with the dangerous nobleman.

Stephanie has survived the difficult birth of twin sons. But Sebastian soon discovers that her marriage has quickly degenerated into a sham. Ashworth abandoned his pregnant bride at his father's Park Street mansion and has continued living an essentially bachelor existence. And mounting evidence--ranging from a small bloody handprint to a woman's silk stocking--suggests that Ashworth's killer was a woman. Sebastian is tasked with unraveling the shocking nest of secrets surrounding Ashworth's life to keep Stephanie from being punished for his death.

Sebastian St. Cyr is called in to investigate a murder.   The murder of a man that very few liked and most are happy that he is dead.     Of course, that leads to many suspects, many false leads, and a lot of clues that seem to lead to dead ends.    I tried to follow the clues and come up with the who done it before I reached the end, I had so many guesses, but I was so wrong.    I was so far off the right path.    I enjoyed every wrong turn that I took.

C.S Harris knows exactly how to write a historical mystery that pulls the reader in, leads them through history, and takes them on a tour of the city.   The settings come to life, the people become real, and the story is not just something to read it is something that you cannot put down.    I have become a fan of the Sebastian St. Cyr series after only reading this one and the one prior to this.


Purchase on Amazon or Barnes and Noble