Blog Tour for Heart in the Right Home by Lisa Hill 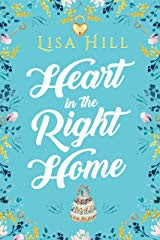 Book blurb:
Wedding bells are chiming in the village of Clunderton, but will it be happy-ever-afters all around? Rebecca Cavendish thinks not. All she’s feeling is shame and remorse since her affair with property mogul, Edward Hardwicke, whilst in another corner of the village, Louise Edwards is slowly coming to the conclusion she might not be in love with husband, Johnnie, anymore.

A wave of limestone-muddy ditch water washed over the window screen. Lottie Hardwicke flicked the wipers as the Land Rover rocked unsteadily from side to side along the long, uneven driveway which led to the Old Rectory, her eyes concentrating on the property details on the passenger seat instead of the frequent potholes extending out in front of her.

It was her first Saturday back at Hardwickes estate agents since the New Year and Lottie usually relished the challenge of getting her teeth stuck into finding someone a new home. But a fortnight at home curled up in front of the wood burner with her husband, Drew, playing charades with the kids and eating her way through her own body weight in roasted peanuts, had left Lottie with a trace of reluctance about escaping Church Cottage this morning. Especially when her skirt was pinching from all her festive over-indulgence and a brief encounter with Jack, her father, on the driveway had allowed the icy January winds to sculpt her long blonde locks into hedgerow-frizz.

New Year, fresh start, Lottie had thought earlier that morning, pelting into Harrogate as fast as Jack’s clapped-out old four-by-four would allow, taming her wild hair into something resembling a ‘style’. This year things were going to change. This was the year she would make her career more than a border-line obsession with property and a weekly excursion into nosing around people’s homes.
Of course, all that changed five minutes after she’d arrived in the office. Finding Duncan, the rostered staff member, had called in sick, Lottie was faced with an impatient Rebecca Cavendish - Branch Manager and general nit-picker - drumming her fingers at Lottie’s punctuality. Lottie might be the wife of the Regional Director but that did little for her reputation. If anything, it meant she had to work even harder at proving her property prowess.

‘Drew’s scheduled an appointment in for ten at the Old Rectory, but he hasn’t made a note of the applicant’s name.’ Rebecca had said raising a perfectly plucked eyebrow. ‘There’s little else on today and seeing it’s raining buckets out there I’d rather not do it myself.’ Rebecca’s lip curled in distaste as she cast an eye over Lottie’s bird-nest chic.

‘That’s fine. I’ll do it,’ Lottie had said, reaching into Duncan’s bottom drawer and retrieving a hard hat.

‘You won’t need that, the builders have finished all the structural work,’ Rebecca snapped.

That was the problem with being married to the boss. You were meant to be abreast of every situation. Even if you only worked one day per week.

The wipers furiously smeared away the ditch water, leaving a brown, rainbow-shaped residue for Lottie to peer through as she navigated her way along the increasingly cavernous drive of the Old Rectory. The freshly rendered limestone of the grandiose Georgian building with its rows of gleaming arch windows stood like a shining beacon against the bleak, Yorkshire landscape. Lottie glanced at the clock; quarter-to-ten. Noting the builders had removed the scaffolding, she was keen to give the house a quick once-over, to check on progress inside and be ‘clued-up’ before the applicants arrived. It was important to know what you were talking about if you wanted to gain people’s trust.

Glancing again at the brochure Lottie scanned the post-it note in Rebecca’s scrawl, bringing herself up-to-date on when the house should be completed. Peering through the smidgen of windscreen not caked in mud, Lottie could see the blurry outline of a car parked in front of the house. Dammit. She’d hoped to be there first. It crossed Lottie’s mind how strange it was Drew hadn’t made a note of who was viewing the property. He was normally fastidious about staff taking names, telephone numbers, email addresses; anything to bombard people with information on properties new to the market.

Lottie’s foot eased off the accelerator as she recognised the black Mercedes casually parked at an angle as if it already belonged to the house and its estate. Her stomach lurched like a washing machine about to switch into spin cycle.

It couldn’t be. It must be a coincidence. After all there were plenty of black Mercedes up and down the country.

Pulling up in front of the waiting car, Lottie’s heart fluttered, and she gripped the steering wheel harder. Managing to let go, she picked up the keys for the property, gathered her file with the brochure and pulled the car key out of the ignition.

Deep breaths and count to three; this could just be an unhappy coincidence.

But even if her heavy breathing was rapidly steaming up the Land Rover’s windows she could still make out the unmistakable AGENT 1 registration plate as she slowly rotated her head towards the stationary car. And if that wasn’t enough confirmation, the presence of her father-in-law sitting with an expression to match the miserable day outside and her mother-in-law waving a property brochure, certainly was.

Not wanting to face her in-laws looking like a drowned rat and trying to avoid a big haven’t-seen-you-in-ages type embrace, Lottie dashed past Pamela and Edward Hardwicke’s car, up the steep York-flagstone steps and concentrated as her jittery hands fumbled for the right key to unlock the front door.

‘What a ghastly day, Lottie!’ Pamela Hardwicke’s voice sounded distant as the blustery winds carried her voice away across the fields. It was a shame that gale forces couldn’t carry Pamela in a similar direction.

Finding the right key Lottie nudged the door open with her shoulder. The calming stillness of the vast, bare floorboard entrance with its broad staircase swept over Lottie. It was tempting to shut the door behind her and stay cocooned from reality. 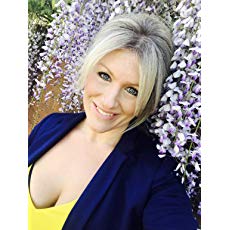 Lisa grew up in the village of Bussage, near Stroud, in the Cotswolds until she returned to Cheltenham as a teenager. She is married to her very own hero, Matt, and has three sons, Hamish, Archie and Laurence. Her first encounter of a romance author was chats over the garden wall between her father, Godfrey, and Mrs Cooper from the neighbouring village of Bisley. It came as quite a surprise in later life to find that Mrs Cooper was in fact Jilly Cooper! Lisa's writing inspiration now comes from other Cotswolds authors including Jill Mansell and Katie Fforde.

Lisa writes contemporary women's fiction with a light-hearted tone. What interests her most is people, their interactions, emotions and relationships. It's probably why her career to date has been based in property; she confesses herself that she is 'naturally curious'.

When she's not busy writing, helping Matt run his electrical empire, or being her sons' taxi service, Lisa enjoys long walks with the family gundog, Sparky, and is training to be a counsellor where she hopes, one day, to be able to provide therapy in the form of writing to those who need it.

Lisa is a graduate of the Romantic Novelists' Association New Writers' Scheme and attributes this supportive and informative scheme to her career to date, including her debut novel, Meet Me at Number Five, and this year's perfect summer read Heart in the Right Place. 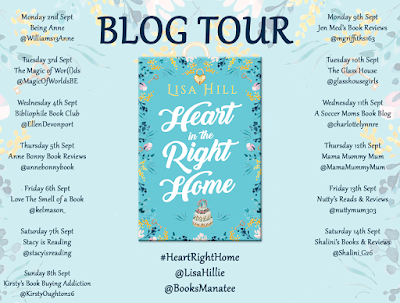