Review for The Murder List: A Novel of Suspense by Hank Phillippi Ryan 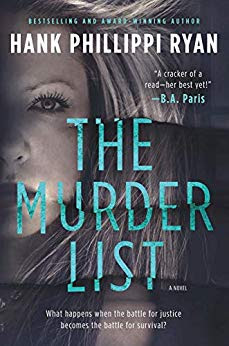 "An exhilarating thrill ride that keeps you turning pages.. Ryan deftly delivers a denouement as shocking as it is satisfying."--Liv Constantine, bestselling author of The Last Mrs. Parrish and The Last Time I Saw You

Law student Rachel North will tell you, without hesitation, what she knows to be true. She's smart, she's a hard worker, she does the right thing, she's successfully married to a faithful and devoted husband, a lion of Boston's defense bar, and her internship with the Boston DA's office is her ticket to a successful future.

And in this cat and mouse game--the battle for justice becomes a battle for survival.

The Murder List is a new standalone suspense novel in the tradition of Lisa Scottoline and B. A. Paris from award-winning author and reporter Hank Phillippi Ryan.

Oh My… what a suspense thriller.   Hank Phillippi Ryan has an amazing talent to take her readers on a twisted, turned upside down path that will surprise, shock, and pulled the reader in from the very beginning of the book until the very last page.

Rachel North is a law student, married to defense lawyer Jack Kirkland.  Rachel gets a summer internship with Martha Gardinier, who has a hate-hate relationship with Jack.    That in itself should be enough for a great story but then add in the reason that Rachel is working with Martha and it gets so much more interesting.

**Thank you to Hank Phillippi Ryan and Tall Poppy Bloggers for a copy of the book in exchange for an honest review.   All thoughts are my own and no compensation was received in exchange for them.