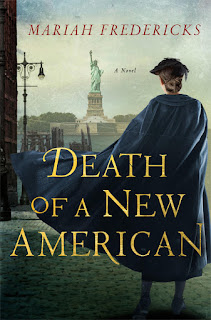 In 1912, as New York reels from the news of the Titanic disaster, ladies’ maid Jane Prescott travels to Long Island with the Benchley family. Their daughter Louise is to marry William Tyler, at their uncle and aunt’s mansion; the Tylers are a glamorous, storied couple, their past filled with travel and adventure. Now, Charles Tyler is known for putting down New York’s notorious Italian mafia, the Black Hand, and his wife Alva has settled into domestic life.

As the city visitors adjust to the rhythms of the household and plan Louise’s upcoming wedding, Jane quickly befriends the Tyler children’s nanny, Sofia—a young Italian-American woman. However, one unusually sultry spring night, Jane is woken by a scream from the nursery—and rushes in to find Sofia murdered, and the carefully locked window flung open.

The Tyler’s believe that this is an attempted kidnapping of their baby gone wrong—a warning from the criminal underworld to Charles Tyler. But Jane is asked to help with the investigation by her friend journalist Michael Behan, who knows that she is uniquely placed to see what other tensions may simmer just below the surface in this wealthy, secretive household. Was Sofia’s murder fall-out from the social tensions rife in New York, or could it be a much more personal crime?

The story is told by Jane Prescott, the maid of a wealthy family in New York in 1912.   The Titanic has sunk, women are marching for their rights, and there has been a murder at the house where a prominent wedding was to be held.

I really enjoyed the history of the time.   It was interesting to see how people reacted to the newspaper articles about the Titanic sinking and how the different newspapers made different headlines out of the same happening.    Women were marching looking for more privileges. The immigration of Italians, specifically talked about in this book, was being made to be a negative thing.  All of this amazing history was woven into a fiction story so that the reader may not even realize that they are learning all while enjoying a wonderful story.

I did not read the first book in this series and I can honestly say that I missed out on nothing.   The characters were easy to figure out and the story was easy to follow.    Death of a New American is a great historical fiction mystery.   I’d recommend picking up a copy and meeting Jane Prescott and her newspaper friend, Michael Behan.

ABOUT THE AUTHOR
Mariah Fredericks
MARIAH FREDERICKS was born and raised in New York City, where she still lives with her family. She is the author of several YA novels. Death of a New American is her second novel to feature ladies’ maid Jane Prescott.
Mariah Fredericks