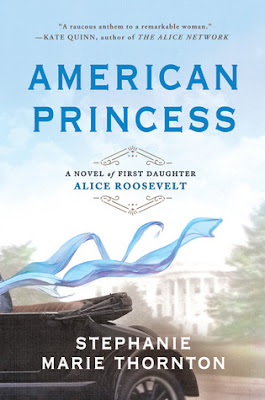 Alice may be the president's daughter, but she's nobody's darling. As bold as her signature color Alice Blue, the gum-chewing, cigarette-smoking, poker-playing First Daughter discovers that the only way for a woman to stand out in Washington is to make waves--oceans of them. With the canny sophistication of the savviest politician on the Hill, Alice uses her celebrity to her advantage, testing the limits of her power and the seductive thrill of political entanglements.

But Washington, DC is rife with heartaches and betrayals, and when Alice falls hard for a smooth-talking congressman it will take everything this rebel has to emerge triumphant and claim her place as an American icon. As Alice soldiers through the devastation of two world wars and brazens out a cutting feud with her famous Roosevelt cousins, it's no wonder everyone in the capital refers to her as the Other Washington Monument--and Alice intends to outlast them all.

I love how even though the world frowned on Alice’s way of life.   She lived life to the fullest and didn’t really worry about what the rest of the world would think.    She used her knowledge of politics to further her causes and to make political pushes for a better world.    Her determination and ability to hold her own in almost any situation made her a force to be reckoned with both personally and politically.

American Princess tells the story of Alice but it also gives us a glimpse into life during the Roosevelt presidency and the world during that time.    I liked that it wasn’t just set in the United States but also throughout the rest of the world bringing to the book a broader storyline.     I learned so much about the world, the United States, and the presidency.

Purchase your copy at Amazon or Barnesand Noble
Posted by A Soccer Mom's Book Blog at 3:00 AM