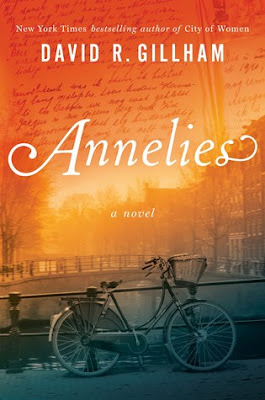 A powerful and deeply humane new novel that asks the question: What if Anne Frank survived the Holocaust?

The year is 1945, and Anne Frank is sixteen years old. Having survived the concentration camps, but lost her mother and sister, she reunites with her father, Pim, in newly liberated Amsterdam. But it’s not as easy to fit the pieces of their life back together. Anne is adrift, haunted by the ghosts of the horrors they experienced, while Pim is fixated on returning to normalcy. Her beloved diary has been lost, and her dreams of becoming a writer seem distant and pointless now.

As Anne struggles to overcome the brutality of memory and build a new life for herself, she grapples with heartbreak, grief, and ultimately the freedom of forgiveness. A story of trauma and redemption, Annelies honors Anne Frank’s legacy as not only a symbol of hope and perseverance, but also a complex young woman of great ambition and heart.

Anne Frank is a cultural icon whose diary painted a vivid picture of the Holocaust and made her an image of humanity in one of history’s darkest moments. But she was also a person—a precocious young girl with a rich inner life and tremendous skill as a writer. In this masterful new novel, David R. Gillham explores with breathtaking empathy the woman—and the writer—she might have become.

What young girl hasn’t read A Diary of a Young Girl while growing up?   When I finished reading it, I re-read it a few more times and then wondered what would have happened if Anne Frank had lived.  This is that story.   The story of a young girl, who lived through hell, saw things no person should ever see, and she lived to tell about it.

Her story starts with her diary, the diary of a young girl telling about her life growing up with her mother and her father.    There are typical teenage girl entries about the clashes with her mother, her wonderful sister Margot, and her perfect father.    Then her life changes, her view of the world is tainted, and the diary isn’t that of a teenage girl.  It is the story of living after concentration camps, of losing her family and friends, and of still living in fear of being a Jew.

I had so many feelings while reading her story.    I hated how her life had changed, I hated how unhappy she was yet I was so proud of how strong she was, how she was able to put one foot in front of the other and move on with her life.   She still was vocal about what she wanted, what she thought, and what she needed but she was miserable, she was in a dark place, and she wasn’t happy.     There are no easy answers as to how to get her life back on track, how to be happy again.   Being happy is something Anne Frank has to do for herself and it is not easy.

**Thank you Sara Leonard of Viking/Penguin for a copy of the book in exchange for an honest review.

Q&A with David R. Gillham, author of ANNELIES: A Novel

ANNELIES is a work of historical fiction that asks the question: What if Anne Frank survived the Holocaust? What sparked your interest in reinventing the life of such a treasured writer?

Anne Frank’s story has always been a story of hope, and hope is the common thread of my writing. Especially under conditions where it’s hard to imagine that such a thing can survive. Probably the most famous passage from Anne’s diary is dated in July of 1944, and in it she writes that, even in the face of war and persecution, she still believes in the basic goodness of people. But the question has been asked, could she still have believed this after experiencing the horrors of Auschwitz and Bergen-Belsen? It is a challenging question, and one, which I wanted to try at least to answer. This novel is my attempt to do so.

How did you approach writing about a Holocaust victim? How are you able to provide validity to Anne’s story?

As I wrote this story, I was constantly aware of the fact that Annelies Marie Frank was a real person, a person who wrote what would one day become an important addition to world literatures. And yet she died tragically as one of millions of unknown faces. In imagining a life for her had she actually survived, I hope to accomplish two things: to give Anne the life she was cheated of and, through telling the story of one girl, to tell the stories of all the “Annes,” thereby underscoring the lost potential of the millions who perished. Anne Frank’s legacy is one of hope, and it is my hope that if I can offer a reminder of what has been lost, we can dedicate ourselves to repairing the world.

How did you set about researching the novel? How did you use your talents as a novelist to imagine Anne’s story?

In writing this book, my priority has been to honor Anne’s story with honesty and accuracy, so I have remained true to the facts, as I understood them. I’ve read deeply, delving into Holocaust histories, biographies of Anne Frank, and her father, “Pim,” memoirs and transcripts of interviews of people who knew her, as well as studying her diary itself. I’ve traveled to the Netherlands twice in researching ANNELIES. To be better educated in the Jewish experience in Amsterdam, I’ve visited the old Jewish Quarter, the former Diamond District, and the Jewish enclave in the Transvaalbuurt, once left in ruins by a freezing population desperate for firewood. And specifically in relation to Anne Frank’s life, I’ve seen the bookshop where she likely picked out her tartan plaid diary, the Jewish Lyceum where she and her sister, Margot, were sent to school during the occupation, and the former Gestapo headquarters where the Franks and their friends were first detained after their arrest. I’ve explored the Frank family apartment in Amsterdam’s Merwedeplein complex. And, of course, I’ve spent hours inside the Anne Frank House itself. I’ve followed Anne Frank’s path from Amsterdam to the remains of the transit camp Westerbork in the northeastern Netherlands, to Auschwitz-Birkenau, where all the inhabitants of the “House Behind” were shipped by the Nazis on September 3, 1944, to Bergen-Belsen inside Germany, where Anne and Margot Frank died of typhus months later. Through study and access to these resources, I have done my level best to portray the historical backdrop against which the Franks lived with authenticity, sincerity, and respect.
The portion of the novel set during the period before the Franks went into hiding fictionalizes a chronicle of events recorded in Anne’s diary, although that timeline has been slightly adapted to accommodate the drama, and the dialogue of the characters largely imagined. The dramatic action of the novel after the return of my character “Anne” from Bergen-Belsen is completely fictional of course, though the background of events against which the action unfolds is based on my research of actual postwar history.

Your last novel, City of Women, was also set in World War II. What attracts you to writing historical fiction, specifically in this time period?

I’ve always been drawn to the past, and consider myself a life-long student of history. I think that history offers many lessons to the present, and that, as a novelist, I am drawn to portraying the parallels. As far as the Second World War is concerned, it seems to me that its sheer scope and tragedy continues to exceed our ability to understand it. So we keep trying. Certainly there have been other brutal and scarring calamities in the length of human history, but few if any have so irrevocably changed the face of the world, and still resonate so widely and deeply. We are living today with the consequences of that war.

One of the most important relationships in the novel is between Anne and her father, Otto “Pim” Frank. How did you develop this father-daughter relationship, both before and after their traumatic experiences?

Dramatically, Anne and Pim represent two different approaches to redemption after trauma. One approach  (Pim’s) refuses to dwell in the tragedies of the past, and looks only toward a better future. The other approach (Anne’s) refuses to relinquish those tragedies, and by facing them, must try to overcome her own anger and guilt. Both paths may to lead to redemption and forgiveness. Both are valid, even when in conflict, because both are fueled, in the end, by the power of hope. Hope is at the heart of ANNELIES.

In developing the fictionalized relationship between my characters of “Anne” and “Pim,” I read biographical and historical works, such as those produced by Mellissa Müller, Carol Anne Lee, and R.W. Jansen. I watched dramatic performances based on Anne’s experiences. I studied accounts of their father/daughter relationship and their personalities left by friends such as Miep Gies. I watched and re-watched postwar film interviews given by Otto Frank, and listened to the stories of the late Cor Suijk, who knew Mr. Frank personally. But really it was Anne Frank herself, in the pages of her diary, who provided me with the contours and depth of their relationship, which I have attempted to portray and upon which I have extrapolated.

Did any other writers inspire you while writing ANNELIES?

I had not actually read Anne Frank’s diary until I read Philip Roth’s novel, The Ghost Writer. In it Roth’s protagonist, Nathan Zuckerman, imagines that a young European woman in her twenties, whom he meets at the home of his mentor, is actually Anne Frank. It’s only a moment’s fantasy really, and Nathan quickly realizes that it’s his willing imagination at work. But it was The Ghost Writer that inspired me to pick up Anne’s diary and read it. I was thunderstruck. Not just by her insight and humor, but by her subtle brilliance as a writer.

Much later on, Cynthia Ozick wrote an article in The New Yorker entitled, “Who Owns Anne Frank?”  It was quite a controversial piece in some ways, but what I recall most was when she asked the reader to consider what important works Anne might have produced had she lived. And that’s when it hit me, hanging onto a strap on the A-train on my way into Brooklyn, that some day I would write a novel about Anne Frank having survived.

And then, of course, there are the many writers who experienced the Holocaust and bore witness, Eli Weisel, Isabella Leitner, Primo Levi, Etty Hillesum (the Dutch writer whose journal and letters were published after her death in Auschwitz.) Also there are the memoires and reminiscences of those who knew Anne Frank personally, such as Hannah Pick-Goslar, Eva Schloss, Nanette Blitz Konig, and Jaqueline van Maarsen. And many, many more survivors, on whose courageous testimony we have come to depend to form our understanding of what cannot be understood.

What do you want people to take away from reading ANNELIES?