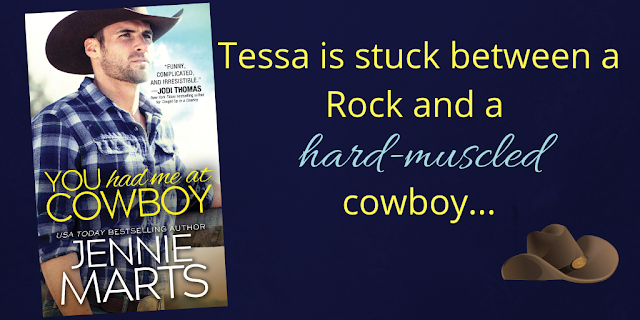 This cowboy is falling hard.

Mason James is the responsible one who stayed behind to run the ranch while his brother, Rock, took off to play professional hockey. Women have used him before to get to his brother—and Mason intends never to get burned again. But after he meets quirky Tessa Kane at his brother’s wedding, Mason discovers he’s ready to take a chance on love.

Tessa Kane is a reporter on the verge of losing a job she desperately needs—unless she’s clever enough to snag a story on the famous Rockford James. But when she falls for her subject’s brother, she’s caught between a rock and a hard-muscled cowboy. What will happen when Mason finds out who she really is? 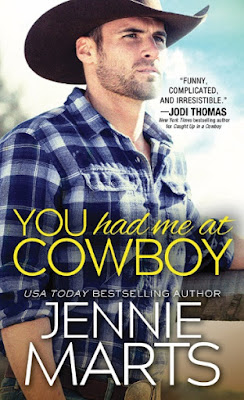 Tessa slipped into the back door of the lodge, clutching the clean shirt to her waist. She spied the ladies’ room door at the end of the hall and hurried toward it, but the door wouldn’t budge.
Dang it.
She waited a few seconds, then checked the other doors in the hallway. The first one was locked, but the second opened into an odd combination coat closet and storeroom, and she slipped inside. One half of the small room was carpeted and had a rod of hangers along part of the wall, while the other side was tiled and had a tall shelf that held assorted books and cleaning supplies.
The room didn’t have a lock, but it would work in a pinch, and she wouldn’t need long to change.
She quickly unbuttoned the stained silk blouse and let it fall to the floor, her mind preoccupied with how she was going to get into the party without Mick. This wasn’t how her day was supposed to go—especially the part about locking her keys in the car—but after a quick round of cussing, followed by a swift bout of self-pity, she’d rallied, giving herself the kind of pep talk she imagined Mimi would have offered.
This might not have been the original plan for the day, but she was improvising and moving on to plan B.
Shoving her arms into the sleeves, she noticed the shirt felt odd but didn’t realize what the problem was until she tried to pull the lapels together. What the heck?
She pulled at the sides again and felt the material stretch across her back.
No. I couldn’t have.
She looked closer at the shirt, and her shoulders fell.
I did. She’d grabbed the wrong white shirt from the dryer. Instead of removing her roomy, stretch-cotton shirt, she’d taken her grandmother’s blouse. Her petite five-foot-nothing grandmother.
Well, shit. She wanted to weep as she looked down and realized there was no way she was squeezing her ample chest into that blouse.
Plan B ruined by a double-D cup!
Dammit.
Please fit, she prayed as she tried again, squashing her chest and working to squeeze the small button into the opposite hole. She cursed the extra weight she’d put on, knowing this wasn’t the first time lately she’d tried to squeeze into apparel that was just a smidge to small.
She let out a tiny shriek as the door to the utility closet suddenly opened, then froze as she took in the ridiculously handsome cowboy who filled its frame. The hinges of his chiseled jaw must’ve been broken because his mouth dropped open, and his eyes went wide at the sight of her.
Par for the course of her day, the button on her shirt picked that horribly inopportune moment to work free, and her shirt popped open like a can of biscuits.
“Oh dang. Sorry,” the cowboy muttered, his eyes widening further as his gaze dropped to the black lacy bra for just a moment before he turned his back and shimmied out of his suit jacket. He passed it back to her. “You all right there, miss?”
No, she was not all right. She was definitely not all right.
She wanted to cry and stamp her feet and run home to Mimi’s house to curl up on her grandmother’s outdated chintz sofa and stuff her face with marshmallow cookies.
But that wasn’t an option because Mimi’s cupboards were bare, and she may not have her house—or the chintz sofa—for much longer. Tess held back a sigh as she slid her arms into the sleeves of the jacket, careful not to mess up the red rose pinned to the lapel.
It was time to admit defeat. To give up on this stupid plan and try to come up with another way to raise the money. She wasn’t cut out for this kind of stress. Maybe she should rethink Mimi’s spiked lemonade-stand idea or see if she could get a job as a waitress.
“I’m fine. Mostly. Except that a bird pooped on my shirt, and the one I was trying to change into must have shrunk in the dryer.” She couldn’t believe she’d just blurted out the bird-turd fiasco, and she couldn’t bring herself to admit the added stupid mistake of grabbing the wrong blouse. “I just need a minute.”
“I’ll leave you to it then,” he answered, a grin tugging at the corners of his lips as he backed away from the door.
She pulled one side of the coat over the other, thankful the suit jacket covered her exposed chest.
Hmmm. She skimmed the satiny petals of the rose. Boutonnieres were typically reserved for the bridal party. This guy must be one of the groomsmen.
“Wait,” she called as the cute cowboy started to walk away.
Plan B had just turned into plan C.
***

Jennie Marts is the USA Today bestselling author of award-winning books filled with love, laughter, and always a happily ever after. She is living her own happily ever after with her husband, two dogs, and a parakeet that loves to tweet to the oldies, in the mountains of Colorado.