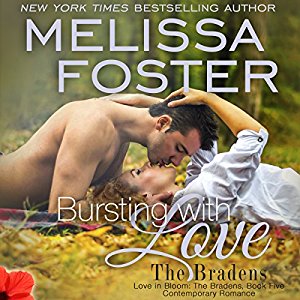 Bursting with Love is the newest addition to The Bradens (Love in Bloom series) by New York Times & USA Today best-selling and award-winning author Melissa Foster. This contemporary romance series features alpha male heroes and sexy, empowered women. They're flawed, funny, passionate, and very relatable to listeners who enjoy new adult romance, contemporary romance, and women's fiction....
After having her heart broken by a country music star, Savannah Braden has sworn off men. She takes a break from her fast-paced Manhattan lifestyle for a weekend at a survivor camp to rebuild her confidence and readjust her priorities. But when she meets the handsome guide, Jack Remington, she's drawn to everything about him - from his powerful physique to his brooding stare - despite the big chip on his shoulder. Powerless to ignore the heated glances and mounting sexual tension, Savannah begins to reassess her hasty decision.
After losing his wife in a tragic accident, Jack Remington found solace in the Colorado Mountains. This solitary existence allows him to wallow in his guilt and punish himself for having made a decision that he believes cost his wife her life. He never expected to want to return to the life he once knew - but then again, he never expected to meet gorgeous, stubborn, and competitive Savannah Braden.
One passionate kiss is all it takes to crack the walls the two have built to protect themselves, and allow love to slip in.

Once again BJ Harrison did a wonderful job sharing Melissa Foster's story with the listeners. As the narrator, BJ, does a gret job changing his voice, his tone, his cadence, and sending the characters feelings through the words. I could recognize which character was speaking just by the tone of his voice. The feelings each character was easy to pick up on and added so much to the listening of Bursting with Love.

Anyone who is familiar with this series or Melissa Foster can tell where this is going, but OH MY….it was hot and fun getting there.
Throughout the Snow Sisters Series, the men have been hot, sexy and romantic. Jack is all those things, but he is also rough and tough with a lot more baggage than the other men. At first I had a hard time warming up to Jack. He came across as rude, obnoxious, and downright uncaring. Then I started getting glimpses of his true self, the self from before the accident, the self he has hidden so deep inside it had to claw its way back out. These glimpses warmed my heart for him. Whether he was able to stay with Savannah or not I really wanted him to be happy again. To understand it is called an accident for a reason and there was nothing anyone could do to stop it and to make up with those closest to him.Savannah is amazing. Not many people can understand what Jack is going through and know the right words to say and the right way to comfort him. At no point did she push him to move on, or forget his wife. She had all the right words to encourage him to make things right, but in his own time frame. I also enjoyed seeing how strong Savannah was, standing up to a groveling ex who caused her nothing but heart ache without knowing if Jack really was her happily ever after.
I am so glad that Savannah got her happily ever after; it’s been a long time coming in this series. Hugh is up next and I can hardly wait to read it. The Remington’s story will follow. Melissa Foster is amazing, she keeps coming up with such different, but equally romantic and fun stories about each character. This is a series I recommend, but you can read any of the books as a standalone.