"Scottoline expertly stokes the boiler to the bursting point, and readers will stay up long past their bedtimes…."
−Kirkus Reviews

“Scottoline’s merging of the themes of her family-driven stand-alone thrillers with her ongoing legal series continues to work splendidly.”
−Booklist 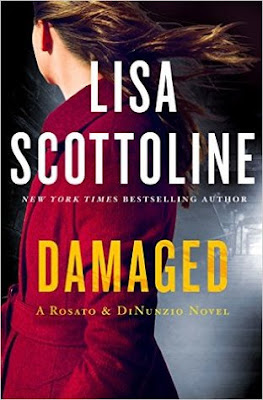 New York Times bestselling and Edgar Award-winning author LisaScottoline brings intensity and emotion to her latest novel,DAMAGED (St. Martin’s Press, Aug. 16, $27.99), the newest in her acclaimed Rosato & DiNunzio series.  Scottoline has been hailed by critics as “a master” (Washington Post, Library Journal), and her gripping thrillers are so packed with twists and turns, that The Providence Journal declared “those who know Scottoline know that when we think we’ve figured everything out, the story is actually just getting started.”

In DAMAGED, Mary DiNunzio, partner at the all-female law firm of Rosato & DiNunzio, finds herself embroiled in one of her most heartbreaking cases yet. Patrick O’Brien, a ten-year-old boy whose small size and dyslexia make him an easy target for bullies at school, is accused of attacking a school aide.  The aide quits and promptly sues the boy, his family, and the Philadelphia school district.

Mary takes on the case, becoming Patrick’s true champion and his once chance for a stable, secure life and the justice he deserves.  She’s up against Nick Machiavelli, her opposing counsel and the dark prince of South Philly lawyers who will use any means necessary to defeat her.  As she becomes more and more invested in the case—putting everything, including her engagement to her longtime boyfriend, on the line—she discovers there is more to the story than meets the eye, and Patrick could be more trouble than she thought.  With family secrets coming to light and Patrick’s fate hanging in the balance,Scottoline wraps heartfelt and emotionally raw dilemmas in a fast-paced, twisting thriller that is not to be missed.

Damaged by Lisa Scottoline is 400+ pages of pure wonderful reading.     I have been reading the Rosato & DiNunzio series from the very beginning and each one just gets better.    What I really enjoy is that each book stands alone.     There is a beginning and an ending, no cliffhangers, no to be continued, just a great story from beginning to end.

With Damaged I started reading and instantly knew that Patrick was a keeper.    This little boy needed someone to keep him safe, advocate for him, and just love him.    Mary is exactly what was needed.      Mary’s instant connection is believable.   Although she only knew him for a few days before she stepped up to be his guardian, their bond was undeniable and strong.     It was nice to see Mary step up for him, putting her own life on hold, and even putting her future in question.  Yet, she never stepped over the line and put her job on the line.   She followed the laws, she listened to her lawyers, and she did as the court asked. He won Mary’s heart but he also won mine.

I waited and waited and waited for the other shoe to drop for Patrick and Mary.   I knew it wouldn’t be easy.   I was sure that they would have to have patience and work to be together.    There was hope throughout the book that everything would work out as it was suppose to.   I love the little twist near the end.  Lisa Scottoline did an amazing job with this story.

I recommend picking up your own copy.


LISA SCOTTOLINE is a New York Times bestselling and Edgar Award-winning author of twenty-four novels. She has 30 million copies of her books in print in the United States, and she has been published in thirty-five countries. She has served as the president of Mystery Writers of America, and her thrillers have been optioned for television and film. She also writes a weekly humor column with her daughter, Francesca Serritella, for The Philadelphia Inquirer, and those critically acclaimed stories have been adapted into a series of bestselling memoirs. She lives in the Philadelphia area with an array of disobedient pets. Visit www.scottoline.com or follow Lisa on Facebook or Twitter at @LisaScottoline.
Posted by A Soccer Mom's Book Blog at 3:00 AM