What She Knew by Gilly Macmillan

I received my review copy from Lauren Truskowski at Harper Collins Publishing in exchange for a honest review. 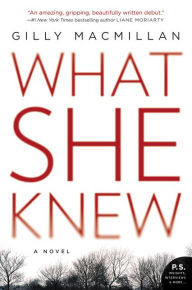 In a heartbeat, everything changes…

Rachel Jenner is walking in a Bristol park with her eight-year-old son, Ben, when he asks if he can run ahead. It’s an ordinary request on an ordinary Sunday afternoon, and Rachel has no reason to worry—until Ben vanishes.

Police are called, search parties go out, and Rachel, already insecure after her recent divorce, feels herself coming undone. As hours and then days pass without a sign of Ben, everyone who knew him is called into question, from Rachel’s newly married ex-husband to her mother-of-the-year sister. Inevitably, media attention focuses on Rachel too, and the public’s attitude toward her begins to shift from sympathy to suspicion.

As she desperately pieces together the threadbare clues, Rachel realizes that nothing is quite as she imagined it to be, not even her own judgment. And the greatest dangers may lie not in the anonymous strangers of every parent’s nightmares, but behind the familiar smiles of those she trusts the most.

Where is Ben? The clock is ticking...

The kidnapping of a child is not an easy topic to talk about or write about.     The characters feelings, the police or detective work, and the emotions of all the people involved are not something that is easy to share with readers.    Gilly Macmillan covered all of this and more in her debut novel.      What She Knew is not written with the feel of a debut book.

While the book is fiction, there is a feel of reality.    The use of social media such as Facebook, Twitter, and online blogs gave it a feel of being current.     There was also paparazzi and high media attention also was very realistic.      The “Have you seen” aspect of the media attention was very true.

The kidnapping is the main story within this book, I was drawn to how the characters changed as the story went on.    The mother, Rachel, realizes that she was holding on to the past and judging her life in comparison to the life of her ex-husband.   She finds that it is not fair to compare and to put her son in the position to not tell her things or to leave things out.  I feel like she grew to accept the separation and understand that while it is not ideal it is okay for her son to have two families and that it was up to the adults to get along and let him feel all their love.      I felt the most connected to the mother due to the fact that I am a mother and could relate to the range of feelings that one would go through in her situation.

If you are looking for a book that will bring tears to your eyes, hope to your heart, and keep your in suspense from the very beginning to the very end this is the book for you.