Review for Man of the Year by Caroline Louise Walker 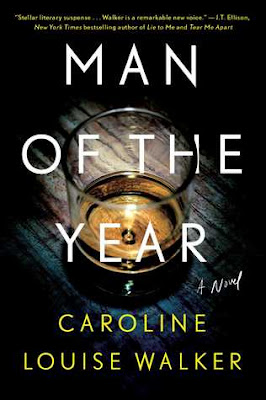 Beware the Man of the Year. You may praise him, resent him, even want to be him: but beneath the elegant trappings that define him, danger looms. Caroline Louise Walker’s stunning debut novel, for fans of Herman Koch’s The Dinner and Shari Lapena’s The Couple Next Door, delves into the increasingly paranoid mind of a man whose life as the most upstanding of citizens hides a relentlessly dark heart.

Dr. Robert Hart, Sag Harbor’s just-named Man of the Year, is the envy of his friends and neighbors. His medical practice is thriving. He has a beautiful old house and a beautiful new wife and a beautiful boat docked in the village marina. Even his wayward son, Jonah, is back on track, doing well at school, finally worthy of his father’s attentions. So when Jonah’s troubled college roommate, Nick, needs a place to stay for the summer, Hart and his wife generously offer him their guest house. A win-win: Jonah will have someone to hang with, and his father can bask in the warm glow of his own generosity.

But when he begins to notice his new houseguest getting a little too close to his wife, the good doctor’s veneer begins to crack. All the little lies Robert tells—harmless falsehoods meant to protect everything he holds dear—begin to mount. Before long, he’s embroiled in a desperate downward spiral, destroying the lives that stand in his way. It’s only the women in his life—his devoted office manager, his friends, his wife—who can clearly see the truth.

Biting and timely, Man of the Year races along at an electric pace, with a wicked twist that you won’t see coming.

Dr. Hart is a distinguished, important man in the Sag Harbor community.     As he wins Man of the Year his life begins to fall apart.   He sees things that aren’t as they seem, he hears things wrongly, and he acts on all of these things.

I started this book expecting a thriller.   It was not a fast start and I began to wonder when the story was going to pick up when the story was going to start moving.    About 1/3 the way through it picked up.   The characters started acting out, the storyline got moving, and I couldn’t stop reading.   I liked that the majority of the book is told from Dr. Hart’s point of view.   There are a few chapters mixed in told from the other characters that added just the right mix to the book.