AUDIOBOOK REVIEW of Dreaming at Seaside by Addison Cole 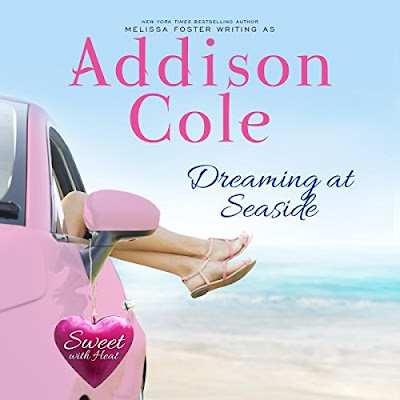 Sweet with Heat: Seaside Summers features a group of fun, flirty, and emotional friends who gather each summer at their Cape Cod cottages. They're sassy, flawed, and so easy to relate to, you'll be begging to enter their circle of friends!

Dreaming at Seaside by Addison Cole is the sweet edition of New York Times best-selling author Melissa Foster's steamy romance novel Seaside Dreams. The stories and characters remain the same, and convey all of the passion you expect between two people in love, without any explicit scenes or harsh language.

In Dreaming at Seaside...

Bella Abbascia has returned to Seaside Cottages in Wellfleet, Massachusetts, as she does every summer. Only this year, Bella has more on her mind than sunbathing and skinny-dipping with her girlfriends. She's quit her job, put her house on the market, and sworn off relationships while she builds a new life in her favorite place on earth. That is, until good-time Bella's prank takes a bad turn and a handsome police officer appears on the scene.

Single father and police officer Caden Grant left Boston with his 14-year-old son, Evan, after his partner was killed in the line of duty. He hopes to find a safer life in the small resort town of Wellfleet, and when he meets Bella during a night patrol shift, he realizes he's found the one thing he'd never allowed himself to hope for - or even realized he was missing.

After 14 years of focusing solely on his son, Caden cannot resist the intense attraction he feels toward beautiful Bella, and Bella's powerless to fight the heat of their budding romance. But starting over proves more difficult than either of them imagined, and when Evan gets mixed up with the wrong kids, Caden's loyalty is put to the test. Will he give up everything to protect his son - even Bella?

One of my favorite things about listening to books rather than reading them is the fact that you get the true feelings behind the words.   When reading it is left to the reader to interpret the meaning behind the words, there is nothing wrong with this there is just different ways to interpret.       While listening to the book you can the tone, the context, and the voice of the character so I sometimes get a different perspective on the story and what the characters true feelings are.     Melissa Moran is talented at being able to take Addison Cole’s written words and bring the characters to life.     Her tone, her speed, and her changes in voices make the story so real that many times I get lost in the story and end up listening to more than I really had time for.

Have you ever read a book that is part of a series and wonder what will happen to the secondary characters? That is what happened when I read Read, Write, Love. I wanted to know if the rest of the Seaside Girls would find their happy endings just like Leanna did with Kurt. Dreaming at Seaside is Bella’s story. Well, Bella and Caden’s story.

Wild, crazy, trickster Bella is swearing off relationships until she gets her life in order. Then one night of being found outside by new local police officer Caden Grant brings sparks to her life. Even swearing off relationships cannot detour the feelings that are between her and Caden. My favorite part is how Caden is just accepted into the folds of the Seaside girls. Instantly Caden is included in their plans, welcome into their lives, and expected to put up with the shenanigans these ladies led by Bella pull.

I loved how with every thought Evan, Caden’s son, is included in Bella’s world. She includes him in their date times, their quiet times, and their fun times. Not every woman would be welcome to a teenage boy coming into her life and not only does she accept Evan but she loves him and wants him in her life.

Addison Cole has written a fun, sexy, sweet, and a tad of heat story that cannot be put down. I recommend picking up your own copy asap and reading this entire series.