SPOTLIGHT & GIVEAWAY of The Cowboy Who Came Calling by Linda Broday 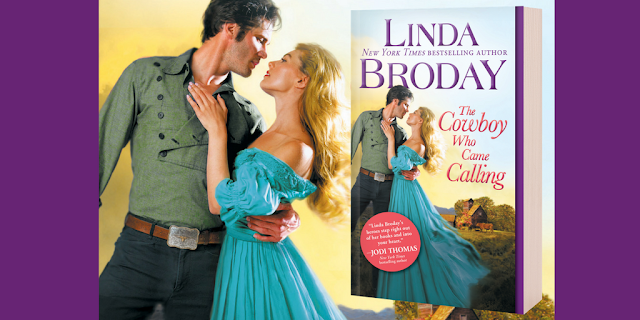 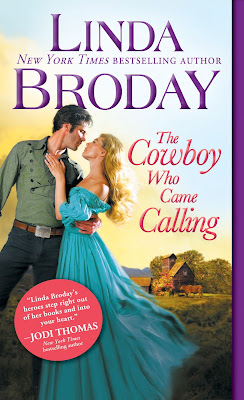 He’ll do what it takes
To win
Her heart

Glory Day may be losing her vision, but that doesn’t mean she’ll ever stop fighting. Determined to provide for her struggling family, she confronts an outlaw with a price on his head. But when a mysterious cowboy gets between her and her target, Glory accidentally shoots him instead. Flustered, she has no option but to take the handsome stranger home to treat his wounds.

Former Texas Ranger Luke McClain didn’t plan to fall in love, but there’s no denying the strength of Glory’s will or the sweetness of her heart. But Glory’s been burned before, and Luke will have to reach into the depths of his own battered soul to convince her to take a chance...

And trust that love is worth fighting for.

The wind shifted to a more southerly tack and hand-carried the scent of wild honeysuckle, bringing to mind the fresh smell of Glory’s hair. Did she miss him? Or did she breathe a sigh of relief to finally be rid of the bother? More likely the latter.
It surprised Luke to realize Glory Day had the power to make him forget Jessie. Or at least dull the memory.
Suddenly, a covey of quail took flight from a cluster of sumac and wild thistle. Soldier pricked his ears, stomping the ground nervously. The hair bristled on the nape of his neck.
Someone lurked out there. He’d faced danger too many times to ignore the warning. The Colt slid easily into the palm of his hand. Quickly, he rolled, stealing into the thick brush.
The fingernail sliver of moonlight suited his purpose fine. Hidden by dark shadows, he waited for the skulking varmint.
Coarse fabric rustled. Luke pivoted his attention back to the campsite in time to see a black figure creep into view. It was too dark to see the face. The extra light of a fire would have helped him. But he hadn’t wanted to announce his position with Perkins in the vicinity.
The intruder poked at the vacant bedroll with the tip of a rifle.
Luke crouched, biding his time.
At the right moment, when the culprit turned away, he jumped. They went down in a heap, jarred by the unforgiving ground. Off flew the intruder’s hat and a cloud of sweet-smelling hair blocked his view. No hard muscles—just soft, womanly curves.
“McClain!”
“Glory?” He blew away the tendrils of hair that swarmed up his nose. The fresh fragrance attacked his jangled nerves.
“What are you doing? Get off me.”
“Me? You’re the one who skulked in here like a common thief.”
No, he took that back. There was nothing common about Glory Day. Stretched out firmly atop her, he felt her racing heart. His toes curled from the sizzling current. Her heaving breasts cozied up against the hardness of his chest like a saloon girl looking to make a bit of change. Have mercy!
“Get off me, you lousy double-crosser!” She beat against his chest
Christmas could’ve come and gone in the length of time it took to pry his fingers loose and lift himself. He battled with the need to hold her close. The bold way her body fit against his made him long for her.
With the deepest regret, he rose, letting her up.
She brushed off her clothes in a huff. Her withering glare might’ve killed a less hardy soul. For him, it would take more than that. Nothing short of death could wipe the grin off his face.
The evil eye she shot him when he didn’t cower under the glare assured him she’d most certainly oblige if given half a chance.
He quickly plucked her Winchester from the dirt where it’d fallen in the scuffle. He wasn’t taking any chances.
“Miss me, huh? Couldn’t stand not having me around?”
“You’re a cheat and a low-down liar.”
“Whoa, there. I’m wounded.” He’d reckoned she’d be mad enough to swallow a horned toad backward, but to come chasing surprised the hell out of him. Didn’t she possess any sense to keep out of harm’s way?
“I don’t suppose you remember we had a deal? It simply slipped your mind that you agreed I’d come with you?”
The rise and fall of her shirt set his imagination ablaze. All that velvety skin lay beneath there. Soft swells he ached to touch. Nipples that begged for attention.
Damn! The honeysuckle still swimming up his nose must’ve pickled his brain.
How could a man fight against something he so desperately wanted? He struggled to pull his stare from her beckoning mouth and lost.
“If I recall, you promised you’d do anything I wanted if I brought you along.” He meant his softly spoken reminder as a warning. The lady trod on his territory now.
She crossed her arms, gifting him with more of those looks that could hard-boil an egg in nothing flat.
“Foolish drivel. Doesn’t matter now. You broke your word.”
He edged closer. He wanted to bother her as much as she did him. And fire and damnation, did she ever!
“Are you quite certain?”
“I’m not bound—”
“Ahhhh, but that’s where you’re mistaken.” His velvet words belied the havoc inside. The attraction between them was far more binding than any hastily spoken agreement.
Panic colored her stone-washed gaze. “I declare our agreement null and void.” She stepped back.
The rifle dropped from Luke’s hand. He barely heard the thump of it hitting the ground over the racket inside his head.
“Too late,” he murmured.
A soft gasp came when he brushed her arm with light fingertips. It didn’t take tugging or cajoling to pull her against him. Her surrender spoke of a need that equaled his.
Anything to oblige a pretty lady.
Tenderly, he caressed her lips with his tongue before he allowed himself to partake of all she gave. He paid no heed to the fact that however much that was, it would never be enough. He’d learned a long time ago to collect each drop of rain. Sooner or later, it’d fill your bucket. 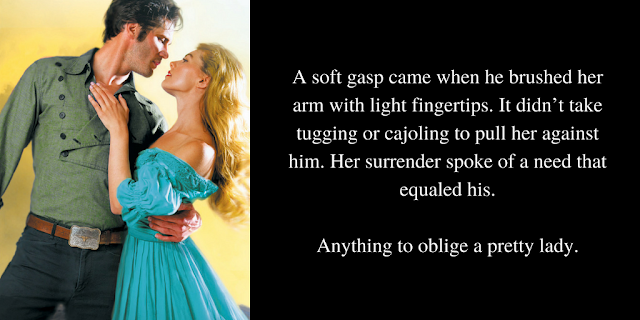 At a young age, LINDA BRODAY discovered a love for storytelling, history, and anything pertaining to the Old West. After years of writing romance, it’s still tall rugged cowboys that spark her imagination. A New York Times and USA Today bestselling author, Linda has won many awards, including the prestigious National Readers’ Choice Award and the Texas Gold. She resides in the Texas Panhandle where she’s inspired every day.

Giveaway
Enter to win a copy of the first book in Linda Broday’s Texas Heroes series, Knight on the Texas Plains